‘A scent of expectation hung in the room, an assumption that she should care or feel something after all this time for someone she never seemed to have known.’

Linda Cracknell is a writer of fiction, non-fiction and radio drama as well as a self-employed teacher and facilitator of creative writing in various settings. Landscape, place and memory are key themes in her work. Here is an extract from her current work-in-progress, When Tumblers Turn, which tells the story of Lucy, a young archaeology graduate who lost her mother in a mountain accident when she was a young child. 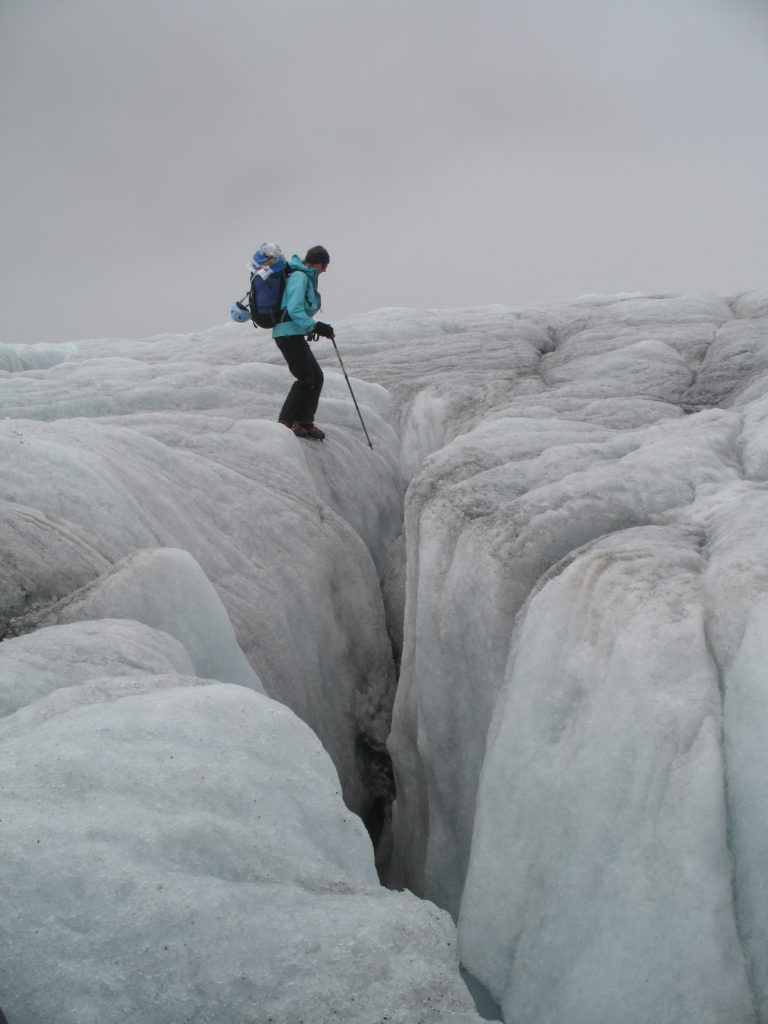 When Lucy put a mug of tea in front of her dad, the face he turned up to her was darkened, yet flamed with something feverish.

‘What?’ She’d been a step ahead of herself, mentally shuffling back along the corridor with her tea and oatcake. But he tipped her off course now, halting her on the far side of the kitchen table.

He looked down again and one hand swiped over the top of his balding head. ‘The thing is, Lucy.’ He took a deep breath. She saw his throat convulse when he swallowed. ‘They …’ One of his hands now fluttered towards the door and her eyes followed it as if an answer hung there.

She’d heard the doorbell earlier, a mutter of voices in the kitchen, the door clicking after goodbyes, and then her dad on the phone for a while. After that, no radio on, no chair scraping on the floor tiles, so she thought he’d gone to the pub. She’d crawled out from under her duvet then and come down the corridor from her childhood bedroom.

A hand twisted across his forehead.

The silence was punctured by swifts screeching as they wove their evening net of flight-paths above the suburban midsummer gardens, revelling in the sultry air.

‘The police have been here,’ he said.

It felled her to sitting right where she was, opposite him at the table. Blood drained from her face, replaced by an icy certainty that this was news for her. She closed her eyes, ambushed by the scent of scorched rosemary, of burning oranges. Wanting, and yet not wanting to know something she had not faced, she held her breath.

So it wasn’t even about her. She slumped back, wiped moisture from her forehead with her T-shirt.

‘They found the passport. And of course the address hasn’t changed in all that time.’

‘The British Embassy in Paris.’

This seemed to be something completely new.

He got up and blundered to her side of the table, stood just behind her, as if wanting to touch her but not quite daring to. She smelt the fox-scent of his underarm sweat, saw from the corner of her eye the rough black hair curling on one arm. His darkness and physical solidity had always seemed alien to her own small frame and her fairness. She’d loved to snuggle against her grandpa, breathing in tweed and peppermint, but how long it was since she’d been this physically close to her dad.

‘It’s about your mother,’ he said.

She turned to look up at him then but he didn’t meet her gaze.

The hands of a clock within her panicked backwards. As a child she’d anticipated this moment. Other people fantasised about discovering they were adopted, and that a foreign king was really their father. She’d instead invented a mother who came back mysterious and beautiful. Alive. But this homecoming was way too late. The idea of a mother was as vague now as a stain on the floor of Neolithic burial chamber where a body had once lain.

She listened to details that hardly made sense. The name of the glacier on Mont Blanc where her mother had fallen into a crevasse: ‘Bossons’.

‘A whole kilometre she’s moved from start to finish,’ he said. ‘In that 23 years the glacier has …’ He pushed a hand towards the floor. ‘You know, with melting …’

‘“Retreated?”’ she offered. Here she knew what she was talking about. Knew the right word. But she noticed he’d avoided saying ‘climate change’.

‘So the Embassy woman said. A lot.’

‘I know,’ she said. ‘There was a huge international conference about it recently. Because the retreat’s so dramatic on some of the Mont Blanc glaciers.’

He frowned. ‘That right?’

He sat down opposite her again, eyes down, hands clenched in front of him. She remembered the sensation of running her small fingers along the string of calluses under each of his finger joints raised by the run of hemp and nylon rope; his work as a lock-keeper on the Caledonian Canal.

‘Thirty years ago you could step out of your cable car straight onto the Mer de Glace,’ she said. These facts were easily retrievable for her even though she had no idea how a glacier would look or feel or move. She’d read the reports, studied the diagrams. ‘Now you have to go down 370 steps.’

He breathed out noisily. Perhaps she’d provoked again the seismic growling which had finally erupted between them after her grandpa’s funeral back in February when he’d dug up a store of rage about sacrifices made for her. It was that spitting, blazing version of her dad who had driven her directly to Spain, securing them each in their own silent quarter. Perhaps their cautious settlement was again at risk.

A scent of expectation hung in the room, an assumption that she should care or feel something after all this time for someone she never seemed to have known.

He opened his mouth to speak but she was quicker: ‘I never knew it was Mont Blanc. Or have I just forgotten?’ She folded her arms, drew in a quick breath. Here it was again – the desire she felt to needle, to put him in the wrong. But he’d barely whispered of her mother before. Family photos were hidden away in the loft along with old camping gear and endless pairs of boots. It required a ladder and a lot of muscle to get up there, leaving the archive to hover above them; an unexplored land.

‘It was quite a long time ago,’ he said, not answering the question. ‘The thing is…’.

She watched his face closely, noticed the map of lines that had spread across it sometime in the last years.

He laid the words down slowly; counters in a steady game: ‘They’re recovering the body. Soon. In a day or two. She’s a little way off the main climbing routes apparently. Discovered by chance. But they’re going to drill the ice around to release her. She can come back then, be flown back.’

So what? she wanted to say.

‘We can have a funeral.’ He took a ragged breath. ‘Or,’ he said slowly, carefully, looking up at her. ‘It’s possible to go there.’

Lucy heard the siren for the road-bridge, which meant it was lifting to allow boats to chug out of the canal for the freedom of the Beauly Firth and the wide-open arms of the North Sea beyond.

‘To meet her halfway,’ he said.

She imagined her dad going to one of those cold-slab mortuary rooms you saw on TV thrillers, to find a heap of remains in a bag. A foul image came to her of a tuber fermented within its skin after being underground for too long. Her mouth flooded and she gripped her hand on the table, ready to rise.

He looked up. ‘You see, they said… it’s a bit remarkable. How she’s been. Preserved.’

A shock thudded across the table.

‘It sometimes happens if there’s a lot of moisture, apparently. No oxygen. It’s like the body’s been in a sealed casket.’

She pictured a carved wooden box with a brass fastening.

‘It turns to a kind of wax. The body,’ he said. ‘You probably know about it from, you know, archaeology stuff.’

‘Not heard of anything quite that crazy.’

He pushed across the table some printed-out pages from a climbing website. It wasn’t the smooth Christmas-cake icing she might have imagined. Crevasses carved across a glacier at tormented angles; corrugated, wildly disordered.

‘The Grand Mulets hut is … perched there.’ A rock speared up in a steep dark triangle on a schematic map. ‘She fell somewhere above it, on the Bossons Glacier. The steepest in the Alps, apparently.’ He pointed to where a small cross had been marked in red below the hut, some GPS coordinates next to it. ‘That’s where she’s been found. On La Jonction. A kilometre below where she fell.’

‘Yes, you said.’ It was as if he was proud of her spectral mini-marathon.

Lucy couldn’t locate this story amidst the sludgy sediment of their history. Did she even want to engage with this long-delayed narrative? A dormant sense of injustice began to boil within her.

‘Did I ever know about this? I just remember that it was an accident on a mountain.’ She felt her mouth wrench into an unruly shape. A part of her wanted to leave the table with her cup of tea, stay on the course she’d determined, turn away from the intrusion. So much else was at stake.

‘Don’t do that,’ he said, taking from her hand a fork she’d been raking into the grain of the wooden table.

She threw herself back in her seat.

‘You don’t remember?’ he said.

She shook her head, arms folded, eyes down. A chasm had been revealed where a bridge should have been.

The photograph was taken by Rick Worrell.