‘To my mind, whisky is a drink of dreams and it makes me smile from my heart.’

Edinburgh’s August festivals may be over, but that doesn’t mean our revels are now ended. Anytime is the right time to spoil yourself! Food writer Ghillie Basan knows exactly how use Scotland’s larder for pure, sensual indulgence, and her latest book, Spirit & Spice, takes the reader on a most delicious culinary journey. Here she shares her thoughts on pairing whisky and food. 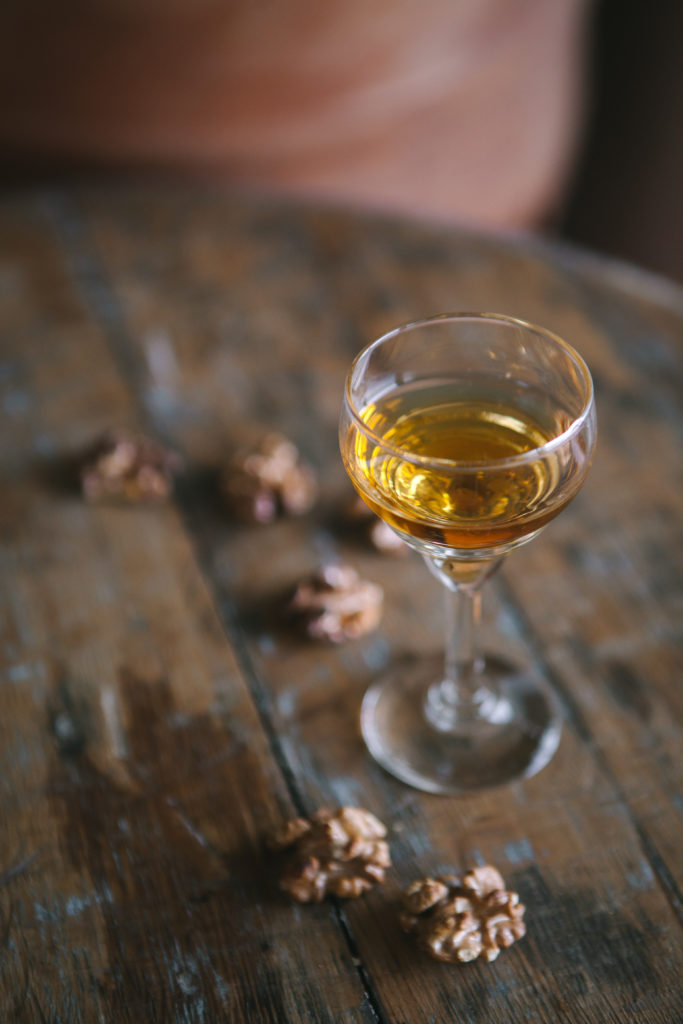 Spices can elevate whisky beyond the realms of taste, comfort and tradition to being downright sexy. The descriptive tasting notes on the bottles and in whisky manuals are a testament to their seduction, such as ‘crisp aroma of fresh linen’, ‘enticing flavours of the Orient’ or maybe ‘comforting like soft pillows’ or ‘silky and lingering’. A hint of spice can flirt on the nose and palate with mystique and warmth, a touch of playfulness against the luxurious background of oak casks infused with sweet sherry, bourbon, rum or cognac or the smokiness of the maverick peat. Whisky can offer opportunities to quietly savour and dream: for a moment the aromas and flavours transport your palate and your mind to a different place or time, but it is often the spice notes that carry your thoughts and take you on that journey. Such is the power of the spirit in all its intriguing complexity.

Many a Scot will tell you that all you need is a ‘wee dram’ to keep you warm, to brighten your spirits, to cure your cold, or to keep you going. Some will even swear that their daily dram has taken them fit and healthy into old age. A dram a day will keep the doctor away. In his retirement, my father became one of these Scots. Every evening, he would nurse a dram, or two, and when he felt a twinge of discomfort from an ulcer, or perhaps from his developing cancer, he would soothe the alcohol burn by adding a splash of milk. Even when he was dying, he would enjoy a milky dram in his bed. When he could no longer speak, we had a ‘thumbs up thumbs down’ system for eating and drinking and his thumb would always rise at the offer of a wee dram. The last taste to pass his lips before he slipped away shortly after his 91st birthday was the salty machair of his beloved smoky Caol Ila.

There was always a bottle of whisky in our house when I was growing up, but until my late twenties I had only really ever had it splashed into my porridge, in a hot toddy with honey and milk, or combined with ginger wine in a Whisky Mac – my favourite hip-flask tipple for skiing in the biting blizzards at Glenshee. The memory of my father enjoying his dram, with or without milk, is firmly etched on my mind from the age of four, but I don’t recall my mother or any of her female friends ever touching a drop; they drank wine or sherry instead. Even the designs on the bottles and boxes depicted men as whisky drinkers – the kilted highlanders, landed gentry kitted out in tweeds for fishing and shooting – yet the roots of the spirit are humble and entrenched in a rural, often harsh, landscape where the women would have been as involved in its illicit production as the men; they would have tended to the pot and probably enjoyed drinking it too. There are several distilleries that have been founded or run by women, and the image of whisky drinking being a male domain is a thing of past with an increasing number of female brand ambassadors and a growing trend of female tasters and distillers.

When it comes to pairing food with whisky, it is the delightfully complex layers of flavour and aroma that need to be teased out and enhanced with skill. To the nose and the palate, there are often detectable fruits like pears, apricots, pineapples and oranges; toasted nuts and grains; warming spices like cinnamon, ginger and nutmeg; and sweet notes of vanilla, honey, caramel, treacle and burnt sugar. In the peaty whiskies there is the aroma and taste of smoke, perhaps of tar, tobacco, wood and grass too, even a hint of sea air. And the ‘finish’ or the ‘mouthfeel’ – the taste that lingers in the mouth after you have swallowed – might be long and luxurious, blunt and citrusy, or silky and creamy. In just one sniff and sip, there can be a lot going on, sometimes familiar, other times ambiguous, so in order to pair the whisky with food, you have to strip back the layers in the spirit and build them up again in the food which can be a challenge.

The best way to do this is to work within a flavour spectrum and enhance the key notes by utilising different techniques to complement and contrast and to introduce textures. You might do this by smoking, curing, pickling or conserving ingredients and then introduce the spice notes by working the natural oils in the spices through roasting, grinding and pounding them to a paste. How you combine the spices and pastes is crucial as you want them to provide a warming, perhaps lingering, back note to the punchier, fresher ones that hit the front of the palate and, ideally, you want to create subtle layers of flavour. Whisky is a robust spirit and retains its body, flavour and texture when it is paired with spices in this way. In my opinion, this makes it the perfect companion to dishes from many spice cultures like North and West Africa, the Middle East, India, Southeast Asia and the Caribbean. 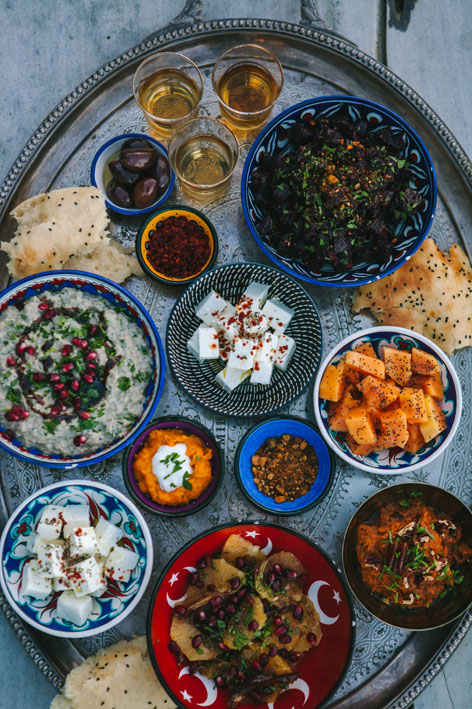 First and foremost, though, whisky is simply a drink to be enjoyed. As taste is subjective, different whiskies appeal to different people. Some people only drink single malts; others only enjoy blends. Whisky is about flavour and the role of the distillers and blenders is to create a balance of flavours that make their whiskies unique – what you do with it after that is up to you. The addition of a drop of water to your whisky is optional but many connoisseurs swear that it releases the aromas and opens up the flavours, smoothing the edges of the alcohol and killing the burn. Adding ice is a personal choice and probably very welcome in a hot climate but some traditionalists might perish at the thought. And having hosted the Chivas Masters group of enthusiastic bartenders from around the world, all competing to create the best whisky cocktail, I have learned that there really are no rules when it comes to the enjoyment of the spirit. I prefer to drink a good dram neat, no water or ice, and sip it in the fresh air on the moor or on my deck with a view to the hills. It is even better when there is a little snow or frost on the ground and the air is so crisp you can see your breath – the whisky warms you from inside and lifts your spirits as your mind drifts. If you are a Scot away from home, it can for a moment bring you back to the feeling of your boots springing on the peat bogs in the mist and the rain. To my mind, whisky is a drink of dreams and it makes me smile from my heart. 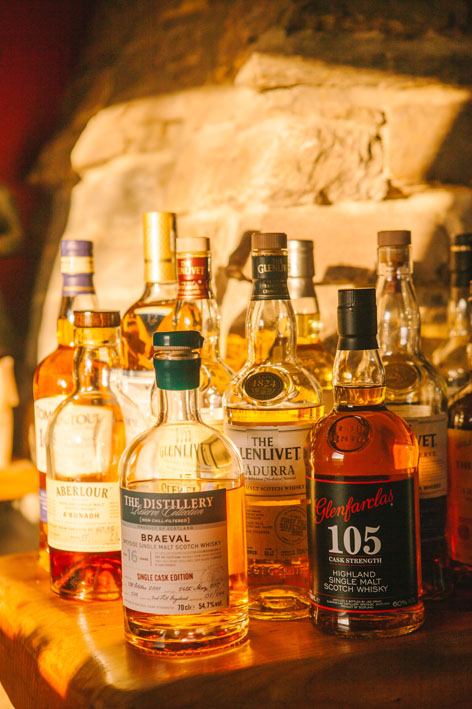 A guide to pairing food with whisky