The annual Burns celebrations are always a welcome moment in the dark January month. This year, Black and White Publishing have released a sumptious celebration of the bard, Burns for Every Day of the Year. Author Pauline Mackay gives us poems and commentary for each day, a perfect way to introduce yourself or rediscover his brilliant work. Here, we share entries for late January to accompany your Burns suppers.

Robert Burns was born on the 25th of January 1759 in Alloway, Ayrshire. It is commonly believed that the first Burns Supper was held in Alloway in July 1801 to commemorate the fifth anniversary of the bard’s death. A gathering of contemporaries and admirers paid tribute to Burns by reading from his works, raising a toast to his memory and dining on haggis, a dish traditionally regarded as peasant food. They agreed to meet again in January of the following year to celebrate the bard’s birth and the tradition developed from there. Burns Night is now a truly global phenomenon: the biggest annual celebration of any author worldwide.

‘To a Haggis’ is the bard’s ode to the dish that has since become the culinary centrepiece of any Burns Supper. Haggis is comprised of those parts of a sheep that would not fetch a good price at sale: heart, lungs and liver combined with oats and seasoning, and boiled in the sheep’s stomach. In a performative piece, abundant with imagery, Burns presents the haggis as nutritious, hamely fare, unpretentious and truly worthy of celebration.

Why not try performing the poem at your own Burns Supper? By the end of this ‘warm-reekin, rich’ address, your company will be ravenous!

The groaning trencher there ye fill,
Your hurdies like a distant hill,
Your pin wad help to mend a mill
In time o’need,
While thro’ your pores the dews distil
Like amber bead.

His knife see Rustic-labour dight,
An’ cut you up wi’ ready slight,
Trenching your gushing entrails bright,
Like onie ditch;
And then, O what a glorious sight,
Warm-reekin, rich!

Then, horn for horn they stretch an’ strive:
Deil tak the hindmost, on they drive,
Till a’ their weel-swall’d kytes believe
Are bent like drums;
Then auld Guidman, maist like to rive,
Bethankit hums.

Is there that owre his French ragout,
Or olio that wad staw a sow,
Or fricassee wad mak her spew
Wi’ perfect sconner,
Looks down wi’ sneering, scornfu’ view
On sic a dinner?

Poor devil! see him owre his trash,
As feckless as a’ wither’d rash,
His spindle shank a guid whip-lash,
His nieve a nit;
Thro’ bluidy flood or field to dash,
O how unfit!

But mark the Rustic, haggis-fed,
The trembling earth resounds his tread,
Clap in his walie nieve a blade,
He’ll mak it whissle;
An’ legs, an’ arms, an’ heads will sned,
Like taps o’ thrissle.

Ye Pow’rs, wha mak mankind your care,
And dish them out their bill o’ fare,
Auld Scotland wants nae skinking ware
That jaups in luggies;
But, if ye wish her gratefu’ pray’r,
Gie her a haggis!

Even in the absence of manuscript evidence, ‘The Selkirk Grace’ has long been attributed to Burns. Another Burns Supper favourite, it represents an important part of the almost ritualistic running order of the festivities.

If haggis is the culinary centrepiece of the Burns Supper, then whisky is its most popular accompaniment. ‘Scotch Drink’ is Burns’s most explicit celebration of the Scottish national tipple and one of the country’s most successful exports (alongside the bard himself). In the following extract, Burns wittily extols the inspirational and illuminating ‘benefits’ of a dram.

Let other Poets raise a fracas
’Bout vines, an’ wines, an’ drucken Bacchus,
An’ crabbed names an’ stories wrack us,
An’ grate our lug:
I sing the juice Scotch bear can mak us,
In glass or jug.

O thou, my MUSE! guid, auld SCOTCH DRINK!
Whether thro’ wimplin worms thou jink,
Or, richly brown, ream owre the brink,
In glorious faem,
Inspire me, till I lisp an’ wink,
To sing thy name!

Let husky Wheat the haughs adorn,
And Aits set up their awnie horn,
An’ Pease and Beans, at een or morn,
Perfume the plain,
Leeze me on thee, John Barleycorn,
Thou king o’ grain!

On thee aft Scotland chows her cood,
In souple scones, the wale o’ food!
Or tumbling in the boiling flood
Wi’ kail an’ beef;
But when thou pours thy strong heart’s blood,
There thou shines chief.

Food fills the wame, an’ keeps us livin;
Tho’ life’s a gift no worth receivin,
When heavy-dragg’d wi’ pine an’ grievin;
But oil’d by thee,
The wheels o’ life gae down-hill, scrievin,
Wi’ rattlin glee.

We draw towards the close of this month with another of Burns’s Bacchanalian productions. Famous for its representation of conviviality and revelry in male friendship, ‘Willie Brew’d a Peck o’ Maut’ was inspired by a meeting between Burns, William Nicol (1744–1797) and Allan Masterton (c.1750–1799). Burns recalled that, ‘We had such a joyous meeting that Masterton and I agreed, each in our own way, to celebrate the business.’ And so, Masterton composed the air to which Burns’s song is set.

Chorus: We are na fou, We’re nae that fou,
But just a drappie in our e’e;
The cock may craw, the day may daw,
And aye we’ll taste the barley bree.

It is the moon, I ken her horn,
That’s blinkin’ in the lift sae hie;
She shines sae bright to wyle us hame,
But by my sooth, she’ll wait a wee!

Every Day of the Year by Pauline Mackay is published by Black and White Publishing, priced £20.00.

Looking for more books to celebrate Burns Night? Check out . . . 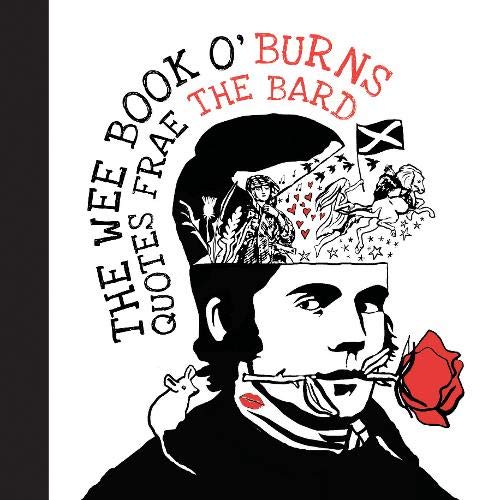 The Edinburgh Companion to Robert Burns, edited by Gerard Carruthers

My Luve’s Like a Red, Red Rose, illustrated by Ruchi Mhasane

The Life of Robert Burns, by Catherine Carswell

The Jewel, by Catherine Czerkawska

On the Trail of Robert Burns, by John Cairney

A Night Out With Robert Burns, edited by Andrew O’ Hagan