The Inspiration Behind The Chessmen Thief

‘Who placed them where they were found? What could have made that person part with such priceless treasure?’

Author Barbara Henderson’s new novel for children, The Chessmen Thief, takes its inspiration from the beautiful and mysterious Lewis Chessmen. Here, she tells BooksfromScotland the full story behind her latest creation.

The Chessmen Thief
By Barbara Henderson
Published by Cranachan Publishing

Inspiration across the board

Can you play chess?

I suspect many of us know some moves or can hold our own on the chequered board, up to a point.

After the success of The Queen’s Gambit on Netflix, you’d be forgiven for thinking that the game of chess is ‘of the moment’, hip and cool. Many people, including myself, are therefore surprised to discover that the game of chess was popular in Norse-held Scotland almost a thousand years ago. Vikings were not only warriors, pillagers, slavers, adventurers, looters and explorers – no, these Norsemen were the original gamers – and skilful crafters too!

I vividly remember the first time I came face to face with the Lewis Chessmen, iconic relics of our Viking past. Dated to the second half of the 12th century and carved of walrus ivory, they were discovered on a remote beach in the Uig region on the Isle of Lewis. Now they can be seen by museum visitors in the National Museum of Scotland, in the British Museum in London and, fittingly, in the Museum nan Eilean in Stornoway. Dad would have loved these figures, I remember thinking. My father was a competitive chess player.

I had seen the Chessmen in London and Edinburgh, but the impact of visiting the figures on the Isle of Lewis was particularly profound. The exhibition room is airy and bright, the display is transparent on all sides and roughly at the level that a gaming table. For the first time, these figures struck me powerfully as objects, to be made, carved, polished, purchased and played with. Instead of artefacts of abstract significance, they felt real, despite the mysteries surrounding them. Who had crafted them, and why? Who did they belong to? Who placed them where they were found? What could have made that person part with such priceless treasure? Some research was in order, because the story sprites of my imagination were off, and I needed to keep up. 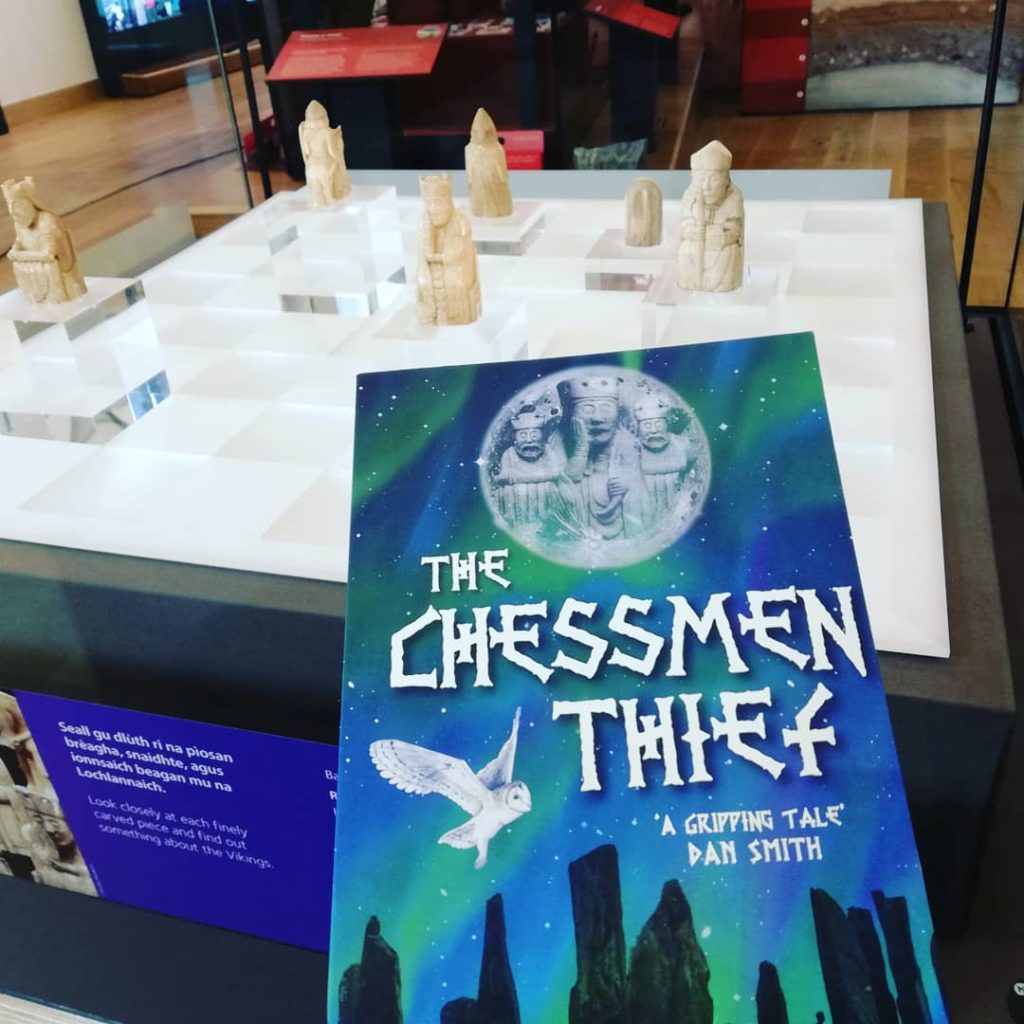 I find it helpful to read around a subject for a while, until some quirky detail or other jumps out at me. I don’t overthink it: if it is interesting enough to lodge itself in my brain, chances are it will be interesting enough to hold the attention of a young reader too. The figures are most likely to have been produced in Trondheim in Norway. A perilous sea journey to the Hebrides beckoned for my book, probably with a stopover in the Northern Isles.

Of course, I needed a young protagonist – easy! Many youngsters were abducted from Scotland and Ireland in Viking raids. And with that came the central motivation too: my young hero Kylan would hail from the Isle of Lewis and long to return. Alongside this, he dreams of freedom: to be more than a pawn in someone else’s game. The handy chess phrases were springing to mind alongside the plotting. My story was beginning to come together!

I was particularly fascinated by the carving process behind the Lewis Chessmen. The idea of shining a light on Norse culture – skilled craftsmanship, sophisticated strategy games and storytelling – really appealed to me. It would be a fresh new angle on the Norsemen, a society where prayers and pillaging went hand in hand. I was hooked, and the writing began in earnest. In the early stages of the manuscript, and just before Covid came along, I managed to get across to Orkney to research the lie of the land and to learn more about the famous 12th century Orkneyinga Saga which was to provide many of the adult characters in the book, including my most terrifying villain.

In the weeks that followed, The Chessmen Thief became much, much more than a story or a conventional work-in-progress. Writing this book was my lockdown routine, my coping mechanism, my escape when I couldn’t go anywhere – and yes, a tribute to my much-missed father.

My hope is that this Viking adventure will provide the same escape, the same flight of the imagination, for youngsters around the country – and perhaps recruit a handful of new chess players too.

My father would have approved.

The Chessmen Thief by Barbara Henderson is published by Cranachan Publishing, priced £7.99