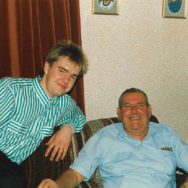 JOHN ‘JOCK’ FINDLAY was born and brought up in the heart of the burgeoning West Lothian shale oil industry. His family and working life was shaped and dominated by The Pumpherston Oil Company or ‘The works’ as it was known locally. ‘The works’ provided jobs, housing, education, cultural events, sport and recreation.
Jock was educated at the local primary school before following other members of his family into the oil industry, working as an apprentice and tradesman chemical plumber; a job, which saw him later spread his wings with a spell in the Middle East. In his early 20s, he suffered very serious injuries following a motorbike accident, which resulted in him spending a year in hospital ultimately losing his leg. He returned to work determined that his disability would not hinder him – it never did. He worked up to retirement age, travelled widely and was always occupied in his garden, his shed or the workshop in the old wash house at his home in the South Village raws.
Jock and his wife Lena had twin boys Ian (Neil’s father, now deceased) and Leonard who still lives in the village. It was Leonard, as the Chief Electrician at the BP detergent works, which occupied the site of the former Pumpherston oil works, who turned off the power and was the last man out when the plant closed in 1993. Thus ending over a century of Findlay family connections to oil and chemical processing in the village.