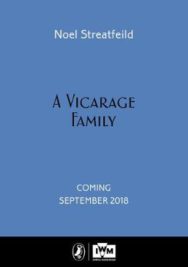 Part of a stunning new design partnership between Puffin and the Imperial War Museum, this is a charming novel from the bestselling author of Ballet Shoes, featuring a special foreword from Dame Jacqueline Wilson.Once there were three little girls. Isobel, the eldest, was pretty, gentle and artistic; Louise the youngest, was sweet and talented – and then there was Vicky, ‘the plain one’, the awkward and rebellious one who didn’t fit in at school or at home. Growing up in a big family Vicky feels overlooked, but gradually begins to realize that she might not be quite as untalented as she feels . . .A Vicarage Family is the first part in a fictionalized autobiography in which Noel Streatfeild tells the story of her own childhood, painting a poignant and vivid picture of daily life in an impoverished, genteel family in the years leading up to the First World War.

Noel Streatfeild (Author)Noel Streatfeild was born in Sussex in 1895 and was one of three sisters. Although she was considered the plain one she ended up leading the most glamorous and exciting life! After working in munitions factories and canteens for the armed forces when WWI broke out, Noel followed her dream of being on stage and went to RADA where she became a professional actress.She began writing children’s books in 1931 and Ballet Shoes was published in 1936. She quickly became one of the most popular authors of her day. When she visited Puffin exhibitions, there were queues right out of the building and all the way down The Mall. She was one of the first winners of the Carnegie Medal and was awarded an OBE in 1983. Noel Streatfeild lived in London. She died in 1986.