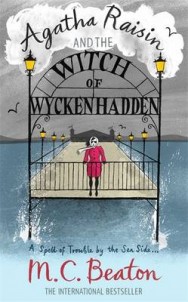 Home > Fiction from Scotland > Agatha Raisin and the Witch of Wyckhadden

Agatha Raisin and the Witch of Wyckhadden

Eye of newt, toe of frog …and murder most foul! Left with bald patches thanks to the wicked doings of a murderer from a previous investigation, Agatha flees to coastal Wyckhadden to re-grow her lost locks. With hair tonic supplied by a local witch, Agatha’s tresses begin to flow – but the witch is found bludgeoned to death. The odd elderly residents of Agatha’s elegantly faded hotel seem innocuous, but as she delves deeper she discovers secrets best left and powerful motives for revenge. Balancing the amorous attentions of police inspector Jimmy Jessop with an ever more treacherous search for the killer, Agatha is at her wits’ end – and ready to cast a spell of her own …Praise for the Agatha Raisin series: ‘Sharp, witty, hugely intelligent, unfailingly entertaining, delightfully intolerant and oh so magnificently non-PC, M.C. Beaton has created a national treasure’ Anne Robinson ‘M.C. Beaton’s imperfect heroine is an absolute gem’ Publishers Weekly ‘The Miss Marple-like Raisin is a refreshing, sensible, wonderfully eccentric, thoroughly likeable heroine.’ Booklist

M.C. Beaton was born in Scotland. She worked for many years as a journalist on Fleet Street. As well as the bestselling Agatha Raisin series, she is the author of the acclaimed Hamish Macbeth mysteries. She divides her time between the Cotswolds, where she lives in a village very much like Agatha’s beloved Carsely, and Paris.