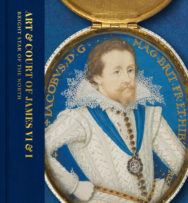 Art & Court of James VI & I: Bright Star of the North

A dazzling selection of art, jewellery, clothing and objects that reflect the dynamic Court of King James Vi & I.Ruler, scholar, politician, poet, theologian, father, husband and patron of the arts – James VI and I assumed all of these roles.The only son of Mary, Queen of Scots and her second husband Henry Stuart, Lord Darnley, James grew up during one of the most turbulent periods of Scottish history. He became King of Scotland at a year old and took control of his kingdom in 1581. Under the Union of the Crowns in 1603, he became the first monarch to reign over the three Kingdoms of Scotland, England and Ireland. This book uncovers the cultural riches of James’s court and aims to rehabilitate James’s reputation – and to demonstrate his impact and legacy on early modern Britain. The pages are packed with dazzling art works and sumptuous objects.

Kate Anderson is Senior Curator, Portraiture, at the National Galleries of Scotland, specialising in 16th- and 17th-century art. In addition to her introductory essay, the book contains essays from scholars in the field which focus on various aspects of the cultural activity that flourished at the court of James VI and I.