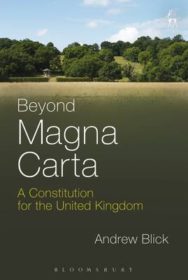 Home > Uncategorized > Beyond Magna Carta: A Constitution for the United Kingdom

Beyond Magna Carta: A Constitution for the United Kingdom

The 800th anniversary of Magna Carta falls in June 2015. In this work Dr Blick argues that this event should be the occasion for a reassessment of the past, present and future of the UK constitution. He draws on his experience as research fellow to the first ever parliamentary inquiry into the possibility of a written constitution for the UK. Dr Blick considers a series of English and UK historical texts from Anglo-Saxon times onwards, among which Magna Carta is the most prominent, which sought to set out arrangements for the governance of England and later the UK as a whole. He argues that they comprise a powerful tradition of written constitutional documents, and stresses the importance of the European dimension to their introduction and content. The author then considers the present nature of the UK constitution, describing the period of immense flux through which it has passed in recent decades, and the implications of this phase of change. Dr Blick identifies a need for a full written constitution for the UK as the next appropriate step. Finally, he discusses the democratic processes suitable to devising such a text, and what its contents might be.`With this book Andrew Blick has made a major contribution to our understanding of how our system of government has worked in the past, how it is working – or not working – now, and what it could be in the future. Combing the centuries, he challenges many misconceptions and makes a powerful case for a written constitution. This volume is absolutely essential to anyone who wants to appreciate the real meaning of Magna Carta and why we should celebrate it.’Graham Allen MP, Chair, House of Commons Political and Constitutional Reform Committee`Beyond Magna Carta brings together the utility of a road map with the fascination of a changing cartography of political thought – all part of the constitutional development of these islands from the Great Charter of 1215 to the confusing aftermath of the Scottish Referendum of 2014. It is a superb work of explanation capped by intriguing suggestions of future possibilities.’Lord Hennessy of Nympsfield, FBA, Attlee Professor of Contemporary British History, Queen Mary, University of London.

Reviews of Beyond Magna Carta: A Constitution for the United Kingdom

…a valuable and meticulously researched study which should be read both by those who favour a written constitution – and those who do not…the book is a valuable contribution to the corpus of literature and analysis on UK constitutional history. — Phillip Taylor MBE, Elizabeth Taylor * The Clapham Omnibus, Summer 2015 * Andrew Blick's highly intelligent Beyond Magna Carta combines a re-assessment of this ancient text with an argument for new constitutional writing in the UK in the future… — Linda Colley * Times Literary Supplement * I recommend this book to all with an interest in British and Canadian history, political science or constitutional law. — Sandra Geddes * Canadian Law Library Review *

Andrew Blick is Lecturer in Politics and Contemporary History at the Institute of Contemporary British History, King’s College London.