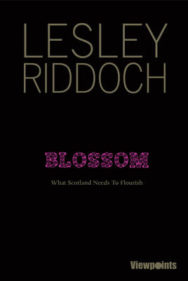 Blossom: What Scotland Needs to Flourish

What will it take for Scotland to blossom?Imagine Scotland as a beautifully-knitted, warmth-providing sweater caught on a snag. Its wearer tries to move forward – but cannot. A pause is needed to lift the garment clear. Scotland is thus snagged. And no amount of tugging will free it from the stubborn, progress-inhibiting three-headed hook of inequality, distant control and top-down governance.Weeding out vital components of Scottish identity from decades of political and social tangle is no mean task, but it’s one journalist Lesley Riddoch has undertaken.Dispensing with the tired, yo-yoing jousts over fiscal commissions, Devo Something and EU in-or-out, Blossom pinpoints both the buds of growth and the blight that’s holding Scotland back. Drawing from its people, history, and the author’s own passionate and outspoken perspective this is a plain-speaking but incisive call to restore control to local communities and let Scotland flourish.

Reviews of Blossom: What Scotland Needs to Flourish

Inspiring, galvanising analysis of the untapped potential of Scottish people power. Get a copy of BLOSSOM.(Karine Polwart, singer/songwriter)It's brilliant – every politician in the land should be made to read the chapter on inequality. I love the human stories in the book, but it's rich with evidence too. The most engaging social policy book I've read in ages (ever?).(Jenny Kemp, Zero Tolerance Campaign)Cracking. A hopeful antidote to so much empty nastiness in politics. Read!(Alyn Smith MEP)Reading Lesley Riddoch's Blossom is like inhaling fjord air after being trapped in a sweaty backroom. Just brilliant(Pat Kane, singer and columnist)Every Scot should read Blossom by Lesley Riddoch before they vote. I'm reading Blossom right now and every paragraph crystallises the nebulous sensations of deep divide inequality and snobbery I have experienced my whole life. (Des Dillon, writer)Blossom is something we should all be reading. This is the book William Power and Edwin Muir should have written. Congratulations on a fine work.(Dr. Elspeth King Director, Stirling Smith Art Gallery and Museum)To all undecideds in Scotland, and all progressives – just to everyone… read Lesley Riddoch's 'Blossom'. She just gets it. (David Greig, playwright)Blossom reveals a Scotland full of promise, whose richest resource – her people – remains untapped. Riddoch's belief in Scotland's countrymen and woman is the lifeblood of Blossom.(Newsnet Scotland)Not so much an intervention in the independence debate as a heartfelt manifesto for a better democracy.(Esther Breitenbach, Scotsman)A hard-hitting condition of Scotland tour-de-force and a characteristically feisty contribution to (and beyond) the present constitutional debate. (Paddy Bort, Product Magazine)Blossom confirms Lesley Riddoch's reputation as one of our top campaigning journalists.(Paul Hutcheon, Herald)We liked her spirited defence of tenement living. THE HERALD

LESLEY RIDDOCH is an award-winning broadcaster, writer and journalist. She writes weekly columns for The Scotsman and Sunday Post and is a regular contributor to The Guardian, Newsnight Scotland and Scotland Tonight. She is founder and director of Nordic Horizons, a policy group that brings Nordic experts into the Scottish Parliament. Lesley presented You and Yours on BBC Radio 4, The Midnight Hour on BBC2 and The People’s Parliament and Powerhouse on Channel 4. She founded the Scottish feminist magazine Harpies and Quines, won two SONY awards for her daily Radio Scotland show and edited The Scotswoman, a 1995 edition of The Scotsman written and edited by its female staff. She lives in Fife and is married to an Englishman who grew up in Canada.