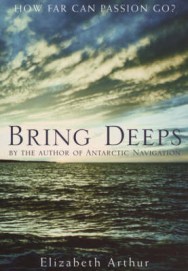 ‘And now began an hour in which I fell in love so hard, so deep, that I would never climb back from the place I’d fallen to.’ On their first meeting, Emrys and Sebastian fall powerfully in love with each other. Up until the moment they meet, they have found passion only in obsessions with ancient civilizations – Sebastian, an archaeologist, in the tombs of Orkney, and Emrys, an American academic, in the study of cuneiform and the civilization which produced the epic of “Gilgamesh”. Now, three weeks after their meeting, Emrys leaves her long-time lover and her job in America to be with Sebastian, a man she has met only once. Their affair is intense and deeply sexual, but darkened by the secrets they keep from one another. With the fog-shrouded megaliths and the wind-blown islands of Orkney as a backdrop, the affair of kindred souls plays out to its tragic conclusion.

'Reminiscent of D.H. Lawrence in its attempts to evoke inner life and conjure up the subconscious … it is an intense and often claustrophobic narrative, infuriating and addictive in equal measure' Sunday Herald 'A brilliant storyteller' Woman & Home

Elizabeth Arthur was born in New York City. She is the author of four previous novels including the acclaimed Antarctic Navigation.