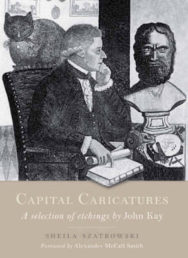 Capital Caricatures: A Selection of Etchings by John Kay

Edinburgh at the end of the eighteenth century was a city teeming with life – eminent doctors and scientists, lawyers and clerics, ladies of fashion and their admirers, soldiers and merchants, murderers and criminals. John Kay was an etcher who recorded the living face of the city in hundreds of portraits, providing an engaging and unparalleled chronicle of Edinburgh life and people during this fascinating period.Within these pages you will find Kay’s gentle and perceptive caricatures of the famous and the unknown, including: Adam Smith, James Hutton, Vincent Lunardi in his balloon, Lachlan McBain, a roasting jack vendor, Lord Monboddo, the skating minister, Robert Johnston and Sibilla Hunt, the most corpulent shopkeepers in Edinburgh, Margaret Sutter, a hawker of salt, Deacon Brodie, Henry Dundas, John Muir of Huntershill, Dr Alexander Hamilton, Dr James Graham (on North Bridge Street, chasing a lady). The etchings and accompanying text bring alive the Edinburgh of the period, from the famous to the fashionable, and will provide a lively introduction to the creativity of John Kay.It will be published at the same time as a Limited Edition of “A Series of Original Portraits and Character Etchings”, a collection of 356 etchings and accompanying text, originally published in two volumes in 1837-8.

Shelia Szatkowski, an expert and enthusiast of his work, selects 90 of the most memorable individuals captured by John Kay. She draws upon the anecdotes given in A Series of Original Portraits and Character Etchings and her knowledge of the period to give lively descriptions of all the characters portrayed by Kay.