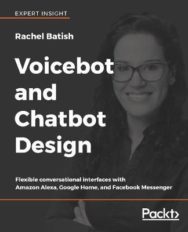 Create conversational interfaces for AI from scratch and with major frameworksAbout This Book* Entirely practical, but well-grounded approach to chatbot and voicebot building* Takes the reader through all major voice/chatbot platforms and lets him/her make up his/her own mind* Champions a non-algorithmic, user-oriented approach to conversational AIWho This Book Is ForThe book requires a general understanding of UI building, but the coding level is kept fairly simple: a basic grasp of markup languages and Javascript would suffice. No deep knowledge of Artificial Intelligence is required, except for basic concepts. Natural language processing is helpful, but not required. Developers and product managers, and even C-level executives will profit from this book, since it shows them the interactive, expressive side of conversational AI. It is impossible to understand modern NLP and AI products without them.What You Will Learn* The elements of conversational user interfaces* Understand the links to Conversational Artificial Intelligence* How to conduct tone analysis and implement the results thereof* Introduces the major conversational UI toolkits like Facebook Messenger, Alexa, and Google Home* Take present and future voicebot developments into accountIn DetailWe are entering the age of Artificial Intelligence, but how do we talk to an AI, and how does it talk to us? There are a number of APIs with which to build an expressive interface, an interface that replies using sound and in full written and spoken sentences, but what are the means and tools by which to have a meaningful conversation with an artificial personality?Rachel Batish introduces us to this world, by showing us first how to build simple conversational interfaces with Facebook Messenger, Alexa, and Google Home; but she then dives into aspects of conversational UIs that are not quite as intuitive a part of the conceptual skeleton, for instance tone analysis, and the building of artificial personalities. For the impatient reader, the second part of the book is probably worth dipping into first. Rachel Batish shows us use cases from the areas of finance, travel and e-commerce; segments of those applications that are not immediately understandable can be analysed by going through some of the materials in the first part of the book. This is not to say that the build-up to the use cases can be skipped entirely, but progress can be accelerated by working through 2 or 3 use cases diligently and learning much of the foundational material while implementing and experimenting.The book closes with an outlook into the future of voicebots, which most experts regard as the most exciting area of conversational UI development today.