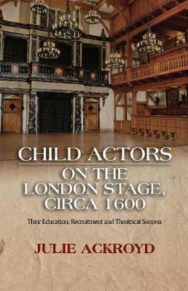 Home > Uncategorized > Child Actors on the London Stage, circa 1600: Their Education, Recruitment and Theatrical Success

Child Actors on the London Stage, circa 1600: Their Education, Recruitment and Theatrical Success

A legal document dated 1600, for a Star Chamber case titled Clifton vs. Robinson, details how boys were abducted from London streets and forcibly held in order to train them as actors for the Blackfriars theatre. No adults were seen on-stage in this theatre, which was stocked solely by acting boys, resulting in a satirical and scurrilous method of play presentation. Were the boys specifically targeted for skills they may have possessed which would have been applicable to this type of play presentation? And, was this method of ‘recruitment’ typical or atypical of Elizabethan theatre? Analysis of the background of the boy subjects of the legal case indicate that several had received grammar-school tuition and, as a result, would have possessed skills in oration and rhetoric. Indeed, a significant number of the grammar schools in London provided regular public disputations and theatrical performances which would have made these boys an attractive proposition for inclusion in a theatrical company. The styles of play-texts which the boys performed and their manner of presenting characters helps to assess why child acting companies were commercially viable and popular. Their portrayal of all roles in a performance; young and old, male and female, clearly demonstrated their versatility and skill in mimicry and the adoption of other personas. Therefore the taking of grammar-school boys for re-training as actors was not opportunistic; their abductions were planned. The theatre owners undertook this method of recruitment as they felt that they were immune from prosecution due to holding royal commissions which they used to recruit boys. However, the Clifton vs. Robinson case clearly demonstrates that a determined parent whose child had been taken could challenge this and demand reparation.