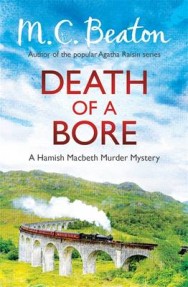 Home > Fiction from Scotland > Death of a Bore

Death of a Bore

Not bored to death but murder most foul …Celebrated author John Heppel is known in Lochdubh as a self-important bore, prone to belittling the scribblings of the locals in his creative writing class. So when he’s found dead, his mouth oozing ink, it seems a fitting fate. But for PC Hamish Macbeth the murder is more than a disruption to idyllic village life – especially when the media arrive, trailing in their wake DCI Heather Meikle, a maneater with a taste for bachelor police constables. Hamish must rekindle an old flame to escape her clutches and pull out all the stops to find the killer. Praise for the Hamish Macbeth series: ‘The detective novels of M. C. Beaton, a master of outrageous black comedy, have reached cult status’. – Anne Robinson, The Times. ‘First rate …deft social comedy and wonderfully realized atmosphere.’ Booklist. ‘It’s always a treat to return to Lochdubh.’ New York Times. ‘Readers will enjoy the quirks and unique qualities of the cast …Beaton catches the beauty of the area’s natural geography and succinctly describes its distinct flavour.’ Library Journal. ‘Befuddled, earnest and utterly endearing, Hamish makes his triumphs sweetly satisfying.’Publishers Weekly.

Reviews of Death of a Bore

Great stuff, as usual. Booklist Once again M C Beaton has concocted an amusing brew of mystery and romance that will keep her fans turning the pages. Publishers Weekly

M C Beaton is the author of the hugely successful Agatha Raisin and Hamish Macbeth series, both published by Constable & Robinson. She left a full time career in journalism to turn to writing, and now lives in a village in the Cotswolds very much like Agatha’s beloved Carsely.