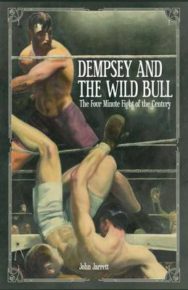 Dempsey and the Wild Bull: The Four Minute Fight of the Century

They still call it the most sensational fight ever for the world heavyweight championship, between champion Jack Dempsey and his hammer-fisted Argentine challenger, Luis Angel Firpo. Back in the Roaring Twenties, 85,000 packed into New York’s Polo Grounds to see all three minutes fifty-seven seconds of it. Nobody asked for their money back. In the first round Firpo was floored seven times, but got up to deck the champion, then knocked him clean into the press section. Pushed back into the ring as the count reached nine, the champion survived the round, thinking he had been knocked out. In round two, Dempsey knocked Firpo out in fifty-seven seconds. The four-minute Fight of the Century was over! ‘The Wild Bull of the Pampas’ became Argentina’s most famous citizen, after the infamous Perons. Dempsey, half a million dollars richer, rested and rusted for three years before losing his title to Gene Tunney.

John Jarrett is the author of six books, including Toy Bulldog: The Fighting Life and Times of Mickey Walker; Dynamite Gloves on boxing’s big punchers; and Gene Tunney, the Golden Guy who Licked Jack Dempsey Twice. John has been a boxing writer for 50 years, and has been Northern Area Secretary for the British Boxing Board of Control since 1977.