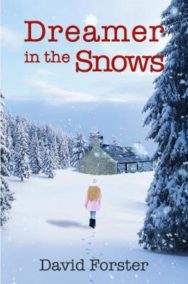 Dreamer in the Snows

When five-year-old Kirsty Macrae has an accident, a series of events follows which are both mysterious and life-changing. The harsh and unforgiving weather conditions lead a sailing crew to land in the Scottish village of Lamlash, where they are called upon to help in Kirsty’s life-saving operation. Strong friendships are formed and a romance blossoms. During her operation, Kirsty dreams of being rescued from the snow by a flying reindeer, called Charity. Not unusual, as it’s nearly Christmas. Or was it a dream? Sometimes, dreams come true. No one can understand the things that happen surrounding Kirsty’s accident and operation, which makes it all the more magical. Is there a good Samaritan out there, or is it someone we don’t really believe in? The tracks and prints in the snow tell us to believe the unbelievable. To have a little faith and hope.

David Forster was born on the 5th August, 1930, in Cheshire. After going to a preparatory school, he was educated at Shrewsbury and then Cambridge, where he took a degree in Natural Science. He then went to the London Hospital to learn clinical medicine and qualified in 1956. Following pre-registration posts, he later joined the RAF for National Service, and spent two years in Aden., before training at an RAF hospital in Obstetrics and Gynaecology. After five years’ service, he returned to the NHS, where he continued his training, finally becoming a consultant in Obstetrics and Gynaecology in a District General Hospital in Essex, where he worked for 25 years. During these years, he took a great interest in garden design and also, when possible, in sailing and ocean navigation. In 1988, he sailed as the navigator across the Atlantic, to Barbados, in a 36ft ketch. He started writing Dreamer in the Snows before retirement, but it is only now published in book form. He is married with five children, now grown up. He still retains a great interest in garden design.