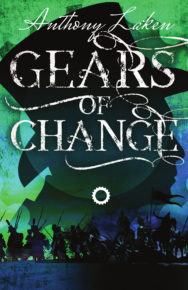 In the shadow of this prophecy, the final game is set to determine the fate of the Estrian empire.

Lady Bellina Ressa has gone through the twelve hells and back to retrieve a book – the key to bringing the bloody reign of Marmossa to an end. The Radiana Magnifica contains all the forgotten history of the world. It is a puzzle inside a puzzle, created to test those worthy of the knowledge within.

As well as cracking the code, she must fight for possession of the relic of the First One, which contains untold quantities of Sortilenergy.

She is the most powerful Cognopath in the land, but it is not enough against ancient magic. And so Bellina gathers her army: a newly awakened mage, one with Amlith’s blood, a healer, a warrior, a scholar, a thief, a father, a lover, and a fallen king.

But as different destinies intertwine, the mission begins to falter.

The end is nigh. Join the adventurous finale of The Infinity Machine series, nominated for the Gemmell Awards.