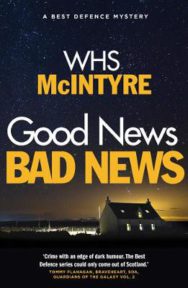 Life’s full of good news and bad news for defence lawyer Robbie Munro. Good news is he’s in work, representing Antionia Brechin on a drugs charge – unfortunately she’s the granddaughter of notorious Sheriff Brechin. His old client Ellen has won the lottery and she’s asked Robbie to find her husband Freddy who’s disappeared after swindling Jake Turpie, but he’s not willing to bury the hatchet – unless it’s in Freddy’s head. Robbie juggles cases and private life with his usual dexterity, but the more he tries to fix things the more trouble everyone’s in.

`Take a large measure of Spencer Tracy and Katherine Hepburn in Adam's Rib, add a plot that would knock John Grisham for six, season with a picaresque cast of supporting characters, garnish with one-liners that Frankie Boyle would kill for and you have a recipe for a page-turner of the highest quality. Good News, Bad News is the latest in real-life lawyer William McIntyre's `Best Defence' novels, and If I was a commissioning editor for one of our TV companies, I'd snap up the rights double quick. I've no doubt they could easily become the most popular crime series since Taggart.'-Alex Norton

WHS McIntyre is a lawyer involved in criminal defence work for so long that he can remember when the Scots Criminal Justice System was regarded as the best in the world, the days when it was “better that ten guilty men go free than one innocent man be convicted.”