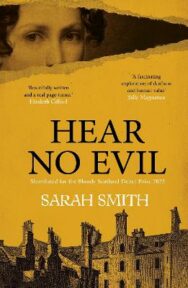 Hear No Evil: Shortlisted for the Bloody Scotland Debut Prize 2022

SHORTLISTED FOR THE BLOODY SCOTLAND DEBUT PRIZE 2022’Beautifully written and a real page turner -a wonderful insight into the early quest to understand and give a voice to people who cannot hear. ‘ Elisabeth Gifford’A fascinating exploration of deafness and human value amid the sights, sounds of smells of 1817 urban Scotland.’ Sally Magnusson ‘told with great empathy and heart’ Guinevere Glasfurd’A striking and stylish literary page-turner that breathes life into the past’ Zoe Strachan’Skilfully combines crime fiction with a woman’s struggle to speak the truth’ The TimesIn the burgeoning industrial city of Glasgow in 1817 Jean Campbell – a young, Deaf woman – is witnessed throwing a child into the River Clyde from the Old Bridge.No evidence is yielded from the river. Unable to communicate with their silent prisoner, the authorities move Jean to the decaying Edinburgh Tolbooth in order to prise the story from her. The High Court calls in Robert Kinniburgh, a talented teacher from the Deaf & Dumb Institution, in the hope that he will interpret for them and determine if Jean is fit for trial. If found guilty she faces one of two fates; death by hanging or incarceration in an insane asylum.Through a process of trial and error, Robert and Jean manage to find a rudimentary way of communicating with each other. As Robert gains her trust, Jean confides in him, and Robert begins to uncover the truth, moving uneasily from interpreter to investigator, determined to clear her name before it is too late.Based on a landmark case in Scottish legal history Hear No Evil is a richly atmospheric exploration of nineteenth-century Edinburgh and Glasgow at a time when progress was only on the horizon. A time that for some who were silenced could mean paying the greatest price.

Reviews of Hear No Evil: Shortlisted for the Bloody Scotland Debut Prize 2022

A striking and stylish literary page-turner that breathes life into the past, illuminating a fascinating corner of history by revealing its lost voices and contemporary resonance. Smith's evocative storytelling and willingness to probe the murkier reaches of the human psyche make her a talent to watch! * Zoe Strachan * A fascinating exploration of deafness and human value amid the sights, sounds and smells of urban Scotland in 1817. * Sally Magnusson * I loved Hear No Evil, beautifully written and a real page turner with characters whose company I enjoyed greatly. It evoked the Edinburgh of that time brilliantly and vividly and gave such a wonderful insight into the early quest to understand and give a voice to people who cannot hear. The historical evocation of Edinburgh and the dramatic murder story were both so well done and so rewarding. * Elisabeth Gifford * A compelling and thoughtful exploration of a deaf woman's struggle for justice in Regency-era Scotland * Rebecca Netley, author of THE WHISTLING * 'Fascinating… gripped me from start to finish' * Westender Magazine * A richly evocative telling. You can almost smell the reek of the old Edinburgh streets. Feel the brutality and inhumanity of it all… A gentle read that belies its power. A stylish murder mystery illuminating a fascinating corner of history. * C&B News * In Sarah Smith's debut, Hear No Evil, Robert Kinniburgh, a teacher at Edinburgh's Deaf and Dumb Institution, is summoned to one of the city's jails, where an unusual prisoner awaits interrogation. Jean Campbell, a deaf woman, is accused of drowning her child, but communication with her has been impossible. Kinniburgh, who employs a form of sign language, becomes the means by which she can tell her story, and slowly the complex reality of what happened emerges. Based on a case from Scottish legal history, Smith's novel skilfully combines crime fiction with a woman's struggle to speak the truth. * The Times *

Sarah Smith is a writer from Glasgow. She has worked as a creative writing tutor, family history researcher and project worker with a number of charities including Deaf Connections where she first came across the story that would go on to inspire Hear No Evil.In 2019, she was awarded a New Writers Award for Fiction from the Scottish Book Trust and graduated with an MLitt (Distinction) in Creative Writing from the University of Glasgow in 2018.