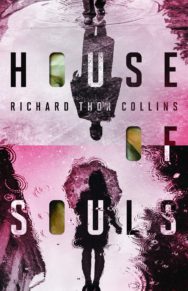 Aidan Manning is a London barrister with a flourishing career. Evelyn Machin is an ER surgeon from Los Angeles who saves lives every day. They live over five thousand miles apart but on a night in 2005, they wake up in the same place. Near a house on a wind-swept cliff-top. Same souls. Different bodies. Led by two guides, they embark on a journey through the deepest questions of life. Traveling from Rwanda to the Deep South, from a wreck in the Pacific to the Crucifixion, they go in search of answers. Burdened by their own pasts, they discover not just insight but healing and restoration. On return to their earthly bodies, however, two questions torment them. Who do I keep meeting in my dreams? And if it’s just a dream, why am I falling in love? Their desperate quest for knowledge – and each other – lead to extraordinary discoveries. About the world. And the meaning of their lives.

For fans of C.S. Lewis and The Shack, this book wrestles with the problem of evil through beautifully crafted and imaginative narrative. Unfolding through courtroom drama, love story, and family saga, at its heart is the defence of God in the face of human suffering. Capturing the heights of joy and the depths of sorrow, House of Souls is a story that reveals a deep and unparalleled love – the love of the Father for us in the midst of pain, which he himself knows only too well.

Richard Thor Collins is a former freelance journalist with the BBC, producing stories for Radio Four and the World Service. He now works with Living Leadership, a charity which supports church leaders around the UK. He writes for LICC, blogs at mirthandmelancholy.com, and likes hanging out with people “on the edge of society.” He has a Masters in Christian Apologetics from Biola University in Southern California, where he met and married his wife Bettina. They have three children and now live in Southampton, UK.