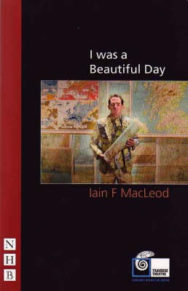 Home > Uncategorized > I Was a Beautiful Day

I Was a Beautiful Day

Traverse theatre premiere for moving and involving a new play about degrees of madness set on the Hebrides. Dan and Lube are patients in a psychiatric unit on a Hebridean island. Dan, an ex-soldier, is in recovery from trauma suffered in Belfast and the first Gulf War. Lube, still on medication, is schizoid following a nervous breakdown. Lube forces them both into a half-fantasy about escaping, but gets jealous and disruptive when Dan shows more interest in a visiting female cartographer, who is seeking to recapture the ‘lost’ Gaelic names of Dan’s native village. Lube comes off his medication, and things begin to boil over…In his second full-length play, following the success of Homers, the poet, Iain F MacLeod sets up a moving and effective opposition between man-made notions of order (the military, the mental asylum) and the lure of nature and myth (Dan recounts how the Norsemen found a Hebridean island so beautiful that they tried to tow it back to Scandinavia). “It Was A Beautiful Day” is premiered by the Traverse Theatre, first in Stornoway in the Outer Hebrides, then in Edinburgh in October 2005.

Reviews of I Was a Beautiful Day

Iain F MacLeod’s work for the theatre includes Alexander Salamander (the story of a Teenage Pyromaniac), staged as part of the Traverse’s Highland Shorts show in 1999, and Homers, premiered at the Traverse in 2002. Born on the Isle of Lewis, he now lives in Glasgow.