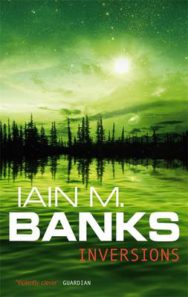 IIn the winter palace, the King’s new physician has more enemies than she at first realises. But then she also has more remedies to hand than those who wish her ill can know about. In another palace across the mountains, in the service of the regicidal Protector General, the chief bodyguard, too, has his enemies. But his enemies strike more swiftly, and his means of combating them are more traditional. Spiralling round a central core of secrecy, deceit, love and betrayal, INVERSIONS is a spectacular work of science fiction, brilliantly told and wildly imaginative, from an author who has set genre fiction alight.

A fantastic, awe-inspiring book … I can't imagine anyone not being won over by this deeply entertaining, thought-provoking and humane story EXPRESS Taut, hilarious and wicked MAIL ON SUNDAY Compulsive Banksian reading … thoughtful, intelligently bloody stuff SFX Captivating … incisive … as sublime as ever TIME OUT