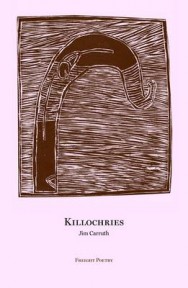 A young man is sent to work on at Killochries, a sheep farm belonging to a relative, after burning out in the city. He is appalled by the absence of his previous life’s essentials, by the remote strangeness of this new world. The old farmer has never left the hills; has farmed them all his life. He doesn’t care for the troubles of the modern world, trusting only in God., and greets the incomer with taciturn indifference. As the winter breaks, so does their silence, drawing them closer through tragedy and miracles. The young man discovers that what he thought uncouth, primitive, has a language and a depth that all the knowledge of modern world could not prepare him for. Despite being Scotland’s leading rural poet, and Glasgow’s official Makar (or Poet Laureate), and having won a clutch of poetry awards, this is Jim Carruth’s first formal collection. An innovative poetry novel, Killochries is a major achievement from one of Scotland’s most important and influential voices.

Jim Carruth was born in Johnstone in 1963 and grew up on his family’s farm near Kilbarchan. His first chapbook collection Bovine Pastoral was published in 2004 and was runner up in the Calum MacDonald Memorial Award. Since then he has brought out a further five pamphlets and an illustrated fable. In 2009 he was awarded a Robert Louis Stevenson Fellowship and was the winner of the James McCash poetry competition. In 2010 he was chosen as one of the poets showcased in Oxford Poets 2010. In 2014 he was appointed Poet Laureate of Glasgow.