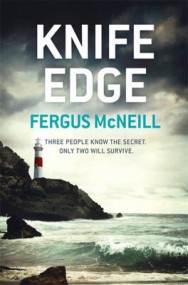 The explosive sequel to EYE CONTACT. He didn’t intend to let her get so close. But now that Kim’s become important to him, Robert Naysmith decides to tell his girlfriend his deadly secret. He wants her to recognise the power he holds. He hopes he won’t have to kill her. Detective Inspector Harland hasn’t forgotten the serial killer who got away from him. But with nothing to go on, he fears he will never bring him to justice. Until he is seconded to investigate the brutal murder of a woman in her Bristol home. A random attack, a murderer who has carefully covered his tracks …alarm bells start ringing. Then Harland meets Kim. One last game of life and death is about to begin.

Praise for EYE CONTACT: 'A chilling game of cat and mouse that should keep you awake long after bedtime. DI Harland is a welcome addition to the growing ranks of British detectives.' Peter Robinson Let's welcome Fergus McNeill to the ranks of British Crime fiction innovators; he has found a darker shade of noir Quintin Jardine Creepy, compelling and completely convincing Erin Kelly, author of THE POISON TREE 'A gripping first novel' Irish Independent A tense, compelling and truly unputdownable read … EYE CONTACT is a novel that will have the reader losing track of time. It also ends on an atypical note, adding to its originality. www.itsacrimeuk.wordpress.com A great read and a chillingly clever insight into the mind and motives of a killer. Brian McGilloway A tense police procedural from a new author with a promising future in crime fiction Choice magazine 'A very impressive debut novel' **** Star magazine

Fergus McNeill is the author of EYE CONTACT and KNIFE EDGE. As well as writing crime novels, he has been creating computer games since the early eighties, writing his first interactive fiction titles while still at school. Now running an app development studio, Fergus lives in Hampshire with his wife and teenage son. You can visit Fergus’s website www.fergusmcneill.co.uk, find him on Facebook www.facebook.com/fergusmcneillauthor or follow him on Twitter twitter.com/fergusmcneill.