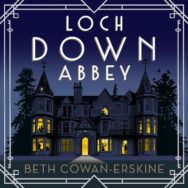 Who killed Lord Inverkillen? Lockdown meets Downton Abbey in this playful, humorous mystery set in 1930s Scotland.No one in. No one out.Family can be murder . . .It’s the 1930s and a mysterious illness is spreading over Scotland. But the noble and ancient family of Inverkillen, residents of Loch Down Abbey, are much more concerned with dwindling toilet roll supplies and who will look after the children now that Nanny has regretfully (and most inconveniently) departed this life.Then Lord Inverkillen, Earl and head of the family, is found dead in mysterious circumstances. The inspector declares it an accident but Mrs MacBain, the head housekeeper, isn’t so convinced. As no one is allowed in or out because of the illness, the residents of the house – both upstairs and downstairs – are the only suspects. With the Earl’s own family too busy doing what can only be described as nothing, she decides to do some digging – in between chores, of course – and in doing so uncovers a whole host of long-hidden secrets, lies and betrayals that will alter the dynamics of the household for ever.Perfect for fans of Downton Abbey, Agatha Christie and Richard Osman’s The Thursday Murder Club, LOCH DOWN ABBEY is a playful, humorous mystery that will keep you glued to the page!(P) 2021 Hodder & Stoughton Ltd

Beth Cowan Erskine is an American expat who married into a mad Scottish family with their own tartan and family tree older than her home country. Using them as inspiration, she wrote her first novel during the coronavirus lockdown, hoping it would be enough to get her dis-invited from the annual family walking holiday. Sadly, it backfired and led to long discussions of who will play whom in the film. When not writing features for The American Magazine, she owns an interior architecture and design studio in the Cotswolds.