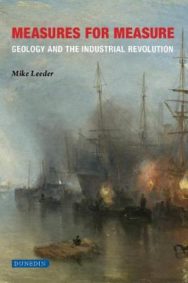 Home > Uncategorized > Measures for Measure: Geology and the industrial revolution

Measures for Measure: Geology and the industrial revolution

Measures for Measure features once greatly-disturbed landscapes – now largely reclaimed, physically at least, by post-industrial activity. Yet the surviving machines, buildings and housing of the original Industrial Revolution, founded mostly upon Coal Measures strata, still loom large over many parts of Britain. They do so nowadays in the family-friendly and informative context of industrial museums, reconstructed industrial settlements, preserved landscapes and historic townscapes. Our society and its creative core of literature, visual arts and architecture were profoundly affected by the whole process. The British Carboniferous legacy for wider humankind was profound and permanent, more so with the realisation over the last 60 or so years that the emission of carbon dioxide during human utilisation of fossil fuels has caused global warming – with all its many unintended consequences.Coal, iron ore and other metallic ores and materials had been extracted from Carboniferous strata and traded for over five hundred years before the Industrial Revolution, notably since thirteenth century in the ‘London Trade’ of coal from Tyneside. By contrast, the neighbouring island of Ireland had no great deposits of coal and ironstone, although with gold, copper, lead and zinc aplenty. What produced this abundance of fossil carbon preserved in the Carboniferous rocks of Britain? Why did the Industrial Revolution originate in Britain in the early- to mid-eighteenth century and not elsewhere in mainland Europe where coal was also abundant?Linked geological, economic and social factors combined to enable the formation, preservation, exposure and exploitation of neighbouring coal- and iron-bearing reserves. The principal features of the distinctive industrial regions that grew up are traced back to their landscapes and geology in a major section of the book. Great industrial cities became wonders of the world, their entrepreneurs and industrialists proud at what they had created. However, industrial workers in their mines, foundries, forges, factories and mills had to collectively fight for economic, political and social rights and then to cope with the many traumas of de-industrialisation and unemployment.Measures for Measure will appeal to all with an interest in the industrial history of Great Britain and its impact on the landscape, economy, social history and culture of the island.

Mike Leeder is Emeritus Professor at UEA Norwich and a former Head of Earth Sciences at Leeds University. Outside his geological comfort zone he has, since his schooldays, taken a keen interest in history, literature and politics, all topics covered in the present book. He is, with Joy Lawlor, co-author of GeoBritannica, the story of British geological and landscape evolution and the related creativity of its peoples since Neolithic times.