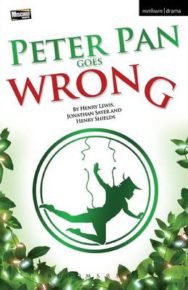 Tonight Neverland is fleshed out with plenty of plant life, certainly bettering 2011’s production of Jack and the Bean-Cactus. So, with no further ado, please put your hands together for J.M. Barrie’s Christmas classic: Peter Pan!The inept and accident-prone Cornley Polytechnic Drama Society set out to present J.M. Barrie’s classic tale of Peter Pan, their most audacious production to date. Flying? Pyrotechnics? Sharp hooks? What ensues is two acts of hysterical disaster. You’ll laugh, they’ll cry. Something so wrong has never been so right.From the mischievous minds of the West End and Edinburgh hit The Play That Goes Wrong comes this highly original, chaos-filled re-telling of J.M. Barrie’s much-loved classic.Peter Pan Goes Wrong received its world premiere at the Pleasance Theatre, London, on 10 December 2013.

Henry Lewis, Jonathan Sayer and Henry Shields are members of Theatre Mischief, a company dedicated to creating engaging and exciting short-form and long-form improvised theatre of an excellent standard through well-honed improvisational technique and strong theatrical ensemble work. Founded in 2008, and formed of students and graduates of the London Academy of Dramatic Art (LAMDA), the award-winning company has performed around the UK, to thousands of people.