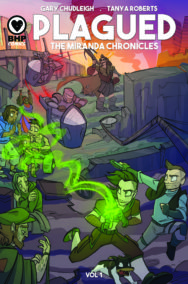 The near future. Scotland has been left decimated by a plague that has swept the country. The scattered population struggle to survive from day to day. And the blame for this pandemic falls squarely on ‘witches’ – seemingly ordinary people with extra-ordinary powers – who are hunted down and forced to stand trial by government sanctioned witch-hunters.

Thomas Mackie is one such witch-hunter and, alongside his dog Dex, he hunts down witches in order to save enough money and buy his way to a better life in one of the exclusive luxury apartment blocks, an oasis from the poverty and devastation. But things take an unexpected turn when Mackie’s latest target – a witch called Miranda Lee – blackmails him into helping her act out a dangerous plot to cure the plague, once and for all.