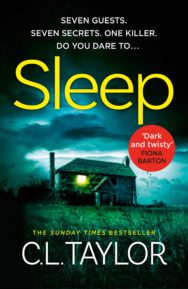 Seven guests. Seven secrets. One killer. Do you dare to SLEEP?

All Anna wants is to be able to sleep. But crushing insomnia, terrifying night terrors and memories of that terrible night are making it impossible. If only she didn’t feel so guilty…

To escape her past, Anna takes a job at a hotel on the remote Scottish island of Rum, but when seven guests join her, what started as a retreat from the world turns into a deadly nightmare.

Each of the guests have a secret, but one of them is lying – about who they are and why they’re on the island. There’s a murderer staying in the Bay View hotel. And they’ve set their sights on Anna.

The million-copy bestseller is back in her darkest, twistiest book to date. Read it if you dare!

'Everything we love in a thriller: creepy, tense and pacy enough to get your heart racing' Good Housekeeping

‘Beware! Sleep does not do what it says on the tin: I was awake until the small hours under its dark and twisty spell.’ Fiona Barton

C.L. Taylor’s books have sold in excess of a million copies, been number one on Amazon Kindle, Kobo, iBooks and Google Play and have been translated into over 25 languages and optioned for TV. THE ESCAPE won the Dead Good Books ‘Hidden Depths’ award for the Most Unreliable Narrator. THE FEAR was shortlisted in the Hearst Big Book Awards in the ‘Pageturner’ category.

Cally Taylor was born in Worcester and spent her early years living in various army camps in the UK and Germany. She studied Psychology at the University of Northumbria and went on forge a career in instructional design and e-Learning before leaving to write full time in 2014. She lives in Bristol with her partner and young son.