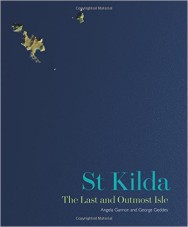 In 1527 Hector Boece, the first Principal of King’s College Aberdeen, wrote in his extensive ‘History of the Scottish People’ of an island of rocky crags and prehistoric sheep, which could only be reached through extreme danger to life. It was, he explained, ‘the last and outmaist Ile’ of Scotland. It was St Kilda. St Kilda breaks the waters of the Atlantic Ocean some 100 miles west of the mainland, and 40 miles west of the Outer Hebridean island of North Uist. On clear days it appears as a dark silhouette on a distant horizon. Approach it, and it resolves into seven shapes – the four islands of Hirta, Boreray, Soay and Dun, and three towering sea stacks. It is an enigmatic and awe-inspiring landscape, a starkly beautiful vision of ‘life on the edge’ which has fascinated everyone from travellers, antiquarians and conservationists to writers,film crews and tourists. And, perhaps as a result, it is one of the most mythologised and misunderstood places on earth. Archaeologists Angela Gannon and George Geddes have spent over nine months living and working on St Kilda, and have been part of a team which has been researching its complex and remarkable history for more than a decade. In this new book they turn the popular perception of the archipelago on its head. St Kilda, they argue, has never existed in total isolation, but has always been linked to a network of communities scattered across the north western seaboard and the Highlands of Scotland. ‘The Last and Outmost Isle’ pulls St Kilda back from the ‘end of the world’ to tell a compelling story of triumph over geographical adversity. What makes these islands so special is not their distance from ‘civilisation’, but rather their enduring capacity to remain a living, connected part of Scotland over the course of some three thousand years.