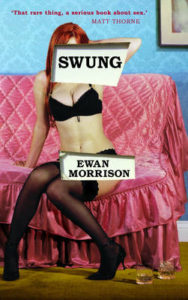 It started as a joke. From the moment she first meets him, Alice is aware that David is impotent. ‘I’m impotent,’ he says, ‘in so many ways.’ He’s separated from his wife and daughter, an HR executive worried for his job at a Glaswegian TV company. She’s American, wants to be an artist. They move in together.To start with, she tells him stories, bedtime stories about couples having sex, them watching. Then Alice finds that David has gone further, and is logging on to swinging sites – horny housewives, couples willing to try anything … Just as a joke, he says. Alice is intrigued. These people seem so honest, so open about needing to reach out and touch. And maybe this is the answer to David’s problem. Maybe they need people like this to give them a love life. And so David and Alice plunge head first into the hidden world of Glasgow swinging, where no one is ugly and nothing is forbidden. Their journey ends at an orgy with nine other couples in the Black Room, where you can see nothing but feel everything. And there, finally, each of them finds what they have been searching for.Like Ewan Morrison’s first book, the highly-praised “The Last Book You Read and Other Stories”, “Swung” is frank, funny, disturbing and compassionate. It confirms Morrison as a writer of great daring and huge gifts.