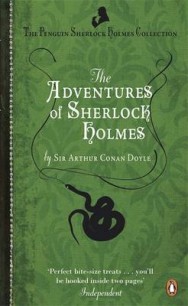 Home > Fiction from Scotland > The Adventures of Sherlock Holmes

The Adventures of Sherlock Holmes

‘It is an old maxim of mine that when you have excluded the impossible, whatever remains, however improbable, must be the truth’. Sherlock Holmes, scourge of criminals everywhere, whether they be lurking in London’s foggy backstreets or plotting behind the walls of an idyllic country mansion, and his faithful colleague Dr Watson solve twelve breathtaking and perplexing mysteries. In “The Adventures of Sherlock Holmes”, the first collection of the great consulting detective’s cases, we encounter some of his most famous and devilishly difficult problems, including “A Scandal in Bohemia”, “The Speckled Band”, “The Red-Headed League”, “The Blue Carbuncle”, “The Five Orange Pips” and “The Man with the Twisted Lip”.

Reviews of The Adventures of Sherlock Holmes

Sir Arthur Conan Doyle (1859-1930) started to write as a doctor, whilst waiting for patients to arrive. Sherlock Holmes first appeared in A Study in Scarlet (1887). The Holmes stories soon attracted such a following that Conan Doyle felt the character overshadowed his other work. In The Final Problem (1893) Conan Doyle killed him off, but was obliged by public demand to restore the detective to life.