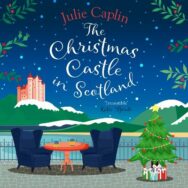 *Preorder the brand new book in the globally bestselling series*Unwrap this gorgeous gift of a book for an escape to the snow-peaked caps of the Scottish Highlands and a romance that will melt your heart…Izzy McBride had never in a million years expected to inherit an actual castle from her great uncle Bill but here she was, in the run up to Christmas, Monarch of her own Glen – a very rundown glen in need of a lot of TLC if her dream of turning it into a boutique bed and breakfast was to come true.But when Izzy’s eccentric mother rents a room to enigmatic thriller author Ross Adair and the Scottish snow starts to settle like the frosting on a Christmas cake, it’s a race to get the castle ready before they’re all snowed in for the holidays.Praise for Julie Caplin:’One unputdownable story’ Katie Fforde’An irresistible slice of escapism’ Phillipa Ashley’Five big fat stars’ Sue Moorcroft

Reviews of The Christmas Castle in Scotland (Romantic Escapes, Book 9)

'A fantastic, huggable, hilarious and addictive read' The Writing Garnet'It's all about the feels…I absolutely loved it' The Cosiest Corner'Sweet, funny and deliciously heart-warming' Frankly, My Dear…'I've already read it again since I finished it… a true sign of how much I enjoyed it' Life Appears

Julie Caplin announced at the age of ten that she planned to be a writer. Along the way she was diverted by the glamorous world of PR and worked on many luxury brands, taking journalists on press trips to places like Turin, Milan, Geneva, Paris, Brussels and Amsterdam. This was rather fabulous training for writing novels as it provided her with the opportunity to eat amazing food, drink free alcohol, hone her writing skills on press releases and to research European cities for her books.Her Romantic Escapes series is an international bestseller in Germany, the Czech Republic and Italy and has now been sold into 18 languages.