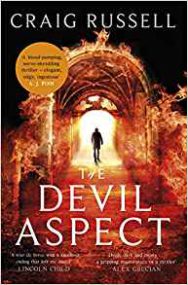 How do you find a killer when you’re surrounded by madness?

1935. As Europe prepares itself for a calamitous war, six homicidal lunatics – the so-called ‘Devil’s Six’ – are confined  in a remote castle asylum in rural Czechoslovakia. Each patient has their own dark story to tell and Dr Viktor Kosárek, a young psychiatrist using revolutionary techniques, is tasked with unlocking their murderous secrets.

At the same time, a terrifying killer known as ‘Leather Apron’ is butchering victims across Prague. Successfully eluding capture, it would seem his depraved crimes are committed by the Devil himself.

Maybe they are… and what links him with the insane inmates of the Castle of the Eagles?

Only the Devil knows. And it is up to Viktor to find out.

Award-winning author Craig Russell’s novels have been translated into twenty-five languages worldwide. Film rights to his forthcoming novel, THE DEVIL ASPECT, have been acquired by Sony Pictures/Columbia Pictures and will be published by Doubleday in the US, Little, Brown in the UK. Screen rights to BIBLICAL have been acquired by Imaginarium Studios/Sonar Entertainment. The first television adaptation in Germany, by Tivoli Films, of a Jan Fabel novel attracted an audience of six million viewers. Three further novels have been made into films (in one of which Craig Russell makes a cameo appearance as a detective).