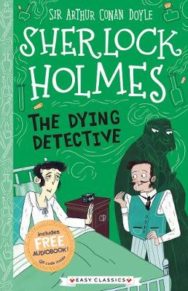 An illustrated adaptation of Sir Arthur Conan Doyle’s classic Sherlock Holmes mystery – at an easy-to-read level for readers of all ages! Also includes a QR code for the free audiobook!’Well, Watson, something bad has happened to me,’ Holmes said. ‘It seems I’m not indestructible after all.’Watson’s worst fears have come true: his best friend, Sherlock Holmes, is dying! Watson is desperate to help, but Holmes is being his usual stubborn self and refuses to see a doctor. Yet with deadly traps, mysterious murder plots and a cunning coffee plantation owner to deal with, Watson begins to wonder whether everything is as it seems …