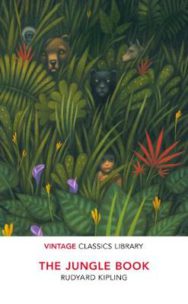 With a beautiful cover and chapter-heading illustrations throughout from queen of colouring Johanna Basford.The Jungle Book tells the story of the irrepressible Mowgli, who is rescued as a baby from the jaws of the evil tiger, Shere Khan. Raised by wolves and guided by Baloo the bear, Mowgli and his animal friends embark on a series of hair-raising adventures through the jungles of India.

Reviews of The Jungle Book

"The colourist have a queen and her name is Johanna Basford" * New York Magazine * "The Jungle Book was one of those rare books that I felt I was actually living as I read it" — Michael Morpurgo "Loved by children and adults alike" * Daily Mail * "The Just So Stories and The Jungle Book by Rudyard Kipling have always held a fascination for me" — HRH Prince of Wales "Rudyard Kipling laid the foundations of modern children's literature with works such as The Jungle Book… wild, magnificent stories that felt as though they'd always existed, stories people might have told each other in the caves" * Daily Telegraph *

Rudyard Kipling was born in Bombay in India in1865 to British parents, and brought by a Portuguese ‘ayah’ (nanny) and an Indian servant, who would entertain him with fabulous stories and Indian nursery rhymes. He was sent back to England when he was seven years old, and lived in a boarding house with a couple who were cruelly strict. Fortunately he returned to India aged 16, to work as the assistant editor of a newspaper in Lahore. He began publishing stories and poems and eventually had great success with his book Plain Tales from the Hills. After his marriage Kipling settled in America, and it was here that he wrote The Jungle Book. He then moved with his family to England, where he wrote Just So Stories for his daughter Josephine who tragically died of pneumonia. Rudyard Kipling was awarded the Nobel Prize for Literature in 1907 and died on 18 January 1936.Johanna Basford Is an illustrator and ink evangelist who prefers pens and pencils to pixels. Her intricate, hand-drawn illustrations are loved the world over by those who have coloured in (sometimes more than once) her previous bestselling books, Secret Garden and Enchanted Forest. Johanna Is a graduate of Duncan of Jordanstone College of Art and Design in Dundee. She likes sugar mice, floral teacups, peonies and bumblebees. johannabasford.com