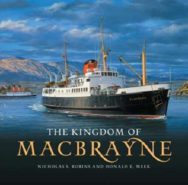 Home > Uncategorized > The Kingdom of MacBrayne

The Kingdom of MacBrayne

Today, the shipowner David MacBrayne (1817-1907) is just as well-known as Samuel Cunard. Red-funnelled ships which bear his name continue to operate in the West Highlands a century after his death. “The Kingdom of MacBrayne” tells the story of David MacBrayne, his ships and his company, his predecessors, rivals and successors. It explores the world of the early steamships, their successes and failures, as well as their contribution to the ever-changing social fabric of the Highlands and Islands. Emigrants, tourists, ordinary travellers and crew members, from engineers to pursers, speak of the ships and their impact on their world. The book documents the arrival of motor-ships (in which David MacBrayne was a world leader) in the early 1900s, the revitalisation of MacBrayne by Coast Lines and the LMS Railway in 1928, and the building of a powerful fleet of modern car-ferries following the formation of Caledonian MacBrayne in 1973. Due attention is given to David MacBrayne’s contemporaries in West Highland shipping, notably Martin Orme and John McCallum, whose famous ships, Dunara Castle and Hebrides, operated ‘circular tours’ from Glasgow to ‘remote St Kilda’ from 1877 to 1939.”The Kingdom of MacBrayne” is lavishly illustrated with drawings, paintings and photographs in black-and-white and colour, most of them shown here for the first time. Featuring the work of artists and model-makers, as well as advertisements and brochures, it examines, by word and image, the whole ‘MacBrayne phenomenon’, from the iconic, sword-bearing Highlander on ships’ figureheads to Katie Morag in Struay.

Nicholas S. Robins is a Hydrogeologist with the British Geological Survey, based at Crowmarsh, Oxfordshire. He is the author of several acclaimed books on the history of British shipping. Donald E. Meek is Professor of Scottish and Gaelic Studies at the University of Edinburgh.