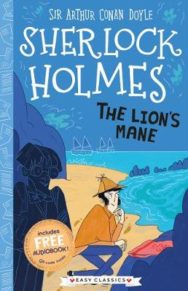 An illustrated adaptation of Sir Arthur Conan Doyle’s classic Sherlock Holmes mystery – at an easy-to-read level for readers of all ages! Also includes a QR code for the free audiobook!Mr McPherson shook his head, squeezed his hands into tight fists and, using the last of strength, said:’The lion’s mane’.Retired now and living in Sussex, Holmes’ life should be perfectly peaceful. But when a local teacher drops dead in front of him, Holmes is thrown back into the world of dangerous detective work. With multiple suspects, mysterious wounds and no Watson around to help him, Holmes is going to be pushed to his limits to solve this strange case.