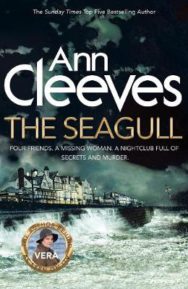 Home > Fiction from Scotland > The Seagull

The Seagull is Ann Cleeves’ searing eighth novel in the bestselling Vera Stanhope series, about corruption deep in the heart of a community, and about fragile, and fracturing, family relationships. A visit to her local prison brings DI Vera Stanhope face to face with an old enemy: former detective superintendent, and now inmate, John Brace. Brace was convicted of corruption and involvement in the death of a gamekeeper – and Vera played a part in his downfall. Brace promises Vera information about the disappearance of Robbie Marshall, a notorious wheeler-dealer, if she will look out for his daughter and grandchildren. He tells her that Marshall is dead, his body buried close to St Mary’s Island in Whitley Bay. However, when a search team investigates, officers find not one skeleton, but two. This cold case takes Vera back in time, and very close to home, as Brace and Marshall, along with a mysterious stranger known only as ‘the Prof’, were close friends of Hector, her father. Together, they were ‘the Gang of Four’, and Hector had been one of the last people to see Marshall alive.Vera must confront her prejudices and unwanted memories to dig out the truth, as the past begins to collide dangerously with the present …

Reviews of The Seagull

A fine writer Sunday Telegraph Cleeves is quietly carving out a reputation as the new Queen of Crime Sunday Mirror Nobody does unsettling undercurrents better than Ann Cleeves — Val McDermid Ann Cleeves is a skilful technician, keeping our interest alive and building slowly up to the denouement. Her easy use of language and clever story construction make her one of the best natural writers of detective fiction Daily Express

Ann Cleeves is the author behind ITV’s Vera and BBC One’s Shetland. She has written over thirty novels, and is the creator of detectives Vera Stanhope and Jimmy Perez – characters loved both on screen and in print. Her books have now sold millions of copies worldwide. Ann worked as a probation officer, bird observatory cook and auxiliary coastguard before she started writing. She is a member of ‘Murder Squad’, working with other British northern writers to promote crime fiction. In 2006 Ann was awarded the Duncan Lawrie Dagger (CWA Gold Dagger) for Best Crime Novel for Raven Black, the first book in her Shetland series. Some of her other novels include the popular Shetland series, Raven Black, White Nights, Red Bones, Blue Lightning, Dead Water and Thin Air. In 2012 she was inducted into the CWA Crime Thriller Awards Hall of Fame and is the 2017 recipient of the CWA Diamond Dagger, the highest honour in British crime writing. Ann lives in North Tyneside.