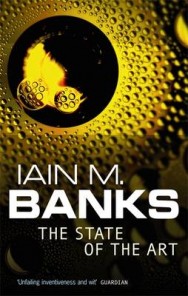 Home > Fiction from Scotland > The State of the Art

The State of the Art

The first ever collection of Iain Banks’s short fiction, this volume includes the acclaimed novella, The State of the Art. This is a striking addition to the growing body of Culture lore, and adds definition and scale to the previous works by using the Earth of 1977 as contrast. The other stories in the collection range from science fiction to horror, dark-coated fantasy to morality tale. All bear the indefinable stamp of Iain Banks’s staggering talent.

Reviews of The State of the Art

'Banks is a phenomenon: the wildly successful, fearlessly creative author of brilliant and disturbing non-genre novels, he's equally at home writing pure science fiction of a peculiarly gnarly energy and elegance' William Gibson 'Few of us have been exposed to a talent so manifest and of such extraordinary breadth' The New York Review of Science Fiction 'Unfailing inventiveness and wit' Guardian