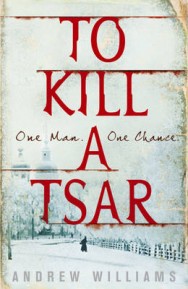 Home > Fiction from Scotland > To Kill a Tsar

To Kill a Tsar

This tense, gripping novel set in 19C St Petersburg amid desperate revolutionaries bent on the overthrow of the Tsar ‘confirms Andrew William’s place in the front ranks of English thriller writers’ (Daily Mail). Shortlisted for the CWA Ellis Peters and the Walter Scott Awards, To Kill a Tsar will appeal to readers of John le Carre, Robert Harris and Alan Furst. St Petersburg, 1879. A shot rings out in Palace Square. Cossack guards tackle the would-be assassin to the ground. In the melee no one notices a striking dark haired young woman in a heavy coat slip away from the scene. Russia is alive with revolutionaries. While Tsar Alexander II remains a virtual prisoner in his own palaces, his ruthless secret police will stop at nothing to unmask those who plot his assassination and the overthrow of the Imperial regime. For Dr Frederick Hadfield, whose medical practice is dependent on the Anglo-Russian gentry, these are dangerous times. Drawn into a desperate cat-and-mouse game of undercover assignations, plot and counter-plot, he risks all in a perilous double life.From glittering ballrooms to the cruel cells of the House of Preliminary Detention, from the grandeur of the British Embassy to the underground presses of the young revolutionaries, To Kill a Tsar is a gripping thriller set in a world of brutal contrasts in which treachery is everywhere and nothing is what it seems.

Reviews of To Kill a Tsar

'Williams contrives an appealing blend of Doctor Zhivago, Conrad's Under Western Eyes and Boris Akunin's 19th-century crime fiction. His ability to bring a past world to life matches Furst's' John Dugdale, Sunday Times 'This is a dense, meaty affair which pulls off the trick of gripping the reader and bringing a complicated, alien world to life' Guardian 'He blends historical fact and fiction in a vivid recreation of the world of The Idiot and Crime and Punishment' The Times 'Elegantly serpentine plotting and finely etched characters confirm his place in the front rank of the new English thriller writers' Daily Mail 'A very accomplished novel which can be enjoyed as a gripping and moving thriller. Yet it is more than that, for it invites us to reflect on questions of morality, and on that age-old question of when, if ever, violent means may be held to justify worthy ends; whether, indeed, such ends can ever be achieved if the means are inescapably criminal' Allan Massie, Scotsman 'Exciting … an important book for devotees of the spy story' Shots Magazine 'A gripping thriller set in a world of treachery' British Fantasy Society 'To Kill a Tsar … had me biting my fingernails with the suspense' Andrew Roberts, Daily Telegraph 'Bravura story-telling… Andrew Williams is the real thing; a writer who can marry popular genres to the sophisticated treatments of political arguments' Independent 'Williams has done his homework and each setting rings true … a well-constructed period thrilller … you will get caught up in conspiracy and counter-plot' Shots magazine 'Sheer escapism … To Kill a Tsar is a bold portrait of revolutionaries seeking to assassinate Tsar Alexander II in St Petersburg … gripping authenticity' Oxford Mail 'I was totally absorbed in this very gripping, sensational historical mystery, with a factual basis and with the nail-biting tension of whether the protagonists will be arrested or not. This is only the author's second novel and yet it was shortlisted for both the Walter Scott Prize and the CWA Ellis Peters Award. The depth of research that the author undertook with this book is to be applauded. I was completely captivated by the very tightly plotted depth of this story which I think is the best historical romantic mystery that I have had the pleasure of reading this year. I hope to include it in my top five books of 2011. If you enjoy a marvellously evocative historical mystery then this is the next one to buy if you have not done so already' Eurocrime

After studying English at Oxford University, Andrew Williams worked as a senior producer for the BBC’s Panorama and Newsnight programmes, then wrote and directed history documentaries. He is the author of two bestselling non-fiction books: The Battle of the Atlantic and D-Day to Berlin. His two acclaimed other novels The Interrogator, which was shortlisted for the Ian Fleming Silver Dagger Award, and The Poison Tide, are both published by John Murray. Andrew Williams lives with his family in Edinburgh. You can find out more about Andrew and his writing at www.andrewwilliams.tv and www.johnmurrays.co.uk, and you can follow him on twitter at @AWilliamsWriter or on Facebook