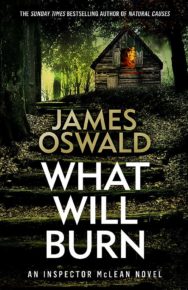 Home > Fiction from Scotland > What Will Burn

The eleventh book in the Sunday Times-bestselling Inspector McLean series, from one of Scotland’s most celebrated crime writers.

The charred remains of an elderly woman are discovered in a burned-out game-keepers cottage, hidden away in woodland to the west of Edinburgh. Clearly no accidental fire, Detective Inspector Tony McLean suspects that neither is this simply a grim arson attack. There is far more to the victim than her humble surroundings might suggest, and something ritualistic to her horrific murder.

Nor will it be the only case of death by fire that Tony and his team will be faced with. This is only the beginning, and with such evil clouding the air, Tony begins to wonder what else will burn . . .

Reviews of What Will Burn

James Oswald is the author of the Sunday Times bestselling Inspector McLean series of detective mysteries, as well as the new DC Constance Fairchild series. James’s first two books, NATURAL CAUSES and THE BOOK OF SOULS, were both short-listed for the prestigious CWA Debut Dagger Award. AS COLD AS THE GRAVE is the ninth book in the Inspector Mclean Series.James farms Highland cows and Romney sheep by day, writes disturbing fiction by night.