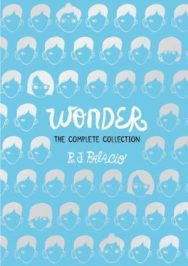 Remarkable . . . It has the power to move hearts and change minds – GuardianIncredibly charming, brutal and brilliant – ObserverJodi Picoult for beginners – Irish TimesWonder was first published in 2012. Since then it has become a critically acclaimed, multi-million global bestseller, and been transformed into a major motion picture starring Julia Roberts, Owen Wilson and Jacob Tremblay. Its simple message of asking children and adults to #ChooseKind has sparked a global movement, and its status as a modern classic is assured.This beautiful special edition contains the original text of Wonder, and also its companion novel, Auggie & Me, which follows the stories of Julian, Charlotte and Christopher, and their relationships with the unforgettable Auggie Pullman.

R. J. Palacio was born and raised in New York City. She attended the High School of Art and Design and the Parsons School of Design, where she majored in illustration. She was a graphic designer and an art director for many years before writing her critically acclaimed debut novel, Wonder, which has been on the New York Times bestseller list since March 2012, and sold over 12 million copies worldwide.In addition to Wonder, R. J. has written Auggie & Me: Three Wonder Stories, 365 Days of Wonder and a picture book, We’re All Wonders. She lives in Brooklyn, New York, with her husband, two sons and two dogs (Bear and Beau). Learn more about her at www.wonderthebook.com or on Twitter at @RJPalacio.