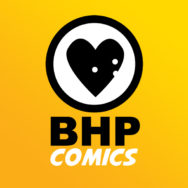 BHP Comics is an independent publisher based in Scotland, producing a variety of comics, graphic novels and art books that cover a wide range of topics and themes. We aim to engage, provoke, inspire and inform with the works we publish.