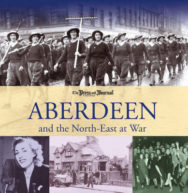 Home > History > Aberdeen and the North East at War

Aberdeen and the North East at War

Throughout history, Britain has been at war with various nations for various reasons and, at the forefront of the engagements, there have always been Scottish troops, Scottish sailors and, during the last century, Scottish pilots. There have been times when the Scots have been at war with the English, and even with fellow Scots. Perhaps it is because Scots are natural warriors that they have never been at peace for very long. “Aberdeen at War” is a beautifully illustrated volume, which includes many spectacular and previously unpublished photographs of the city, taken during the years of the Second World War, and brought together here for the first time. This is a nostalgic and heart-warming tribute to all the citizens of Aberdeen – men, women and children who bravely lived through one of history’s darkest times. With chapters on People at War, Entertainment, Education, The Secret War, and D-Day and Beyond, “Aberdeen at War” covers all aspects of the war through carefully selected images.