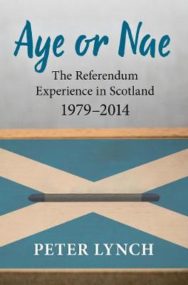 Since 1975, the people of Scotland have responded to a major political question posed to them in a referendum on six occasions: three were UK-wide polls (1975, 2011 & 2016), and three Scotland-specific. In Aye or Nae The Referendum Experience in Scotland 1979-2014, Peter Lynch investigates the three purely Scottish referendums of 1979, 1997 and 2014 when Scotland voted No, then Yes, to devolution and No to independence.Lynch, a Senior Lecturer in Politics and Director of the Scottish Political Archive at Stirling University, considers the dynamics of the three referendums, provides the political and economic context within which the campaigns were fought, chronicles the changing nature of referendum campaigning and considers the impact of the regulation of referendums by the Electoral Commission since 2000.He further discusses the contribution of, and impact on, political parties in each referendum, and how a fundamental internal split or adverse referendum outcome resulted in serious electoral consequences, such as with the SNP’s loss of Westminster seats in 1979, or how backing the successful No campaign in 2014 led to the Scottish Labour Party’s subsequent electoral collapse. It also highlights how referendums have seen the establishment of new campaigning groups, particularly in 2014, which was a significant driver of citizen engagement above and beyond the traditional political parties.Aye or Nae is essential reading for all with an interest in Scottish politics, and to political scientists studying the dynamics and role of referendums.