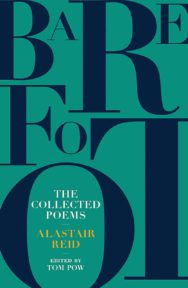 Alastair Reid was a poet, essayist, translator and traveller, who was instrumental in bringing the poems of Borges and Neruda into English. He died in 2014.

Reid started to write for the New Yorker in the late 50’s and contributed poetry and travel pieces for nearly 40 years. However in the 1960’s he also began to translate South American poets, most notably Pablo Neruda and Jorge Luis Borges, becoming friends with both men. Indeed he was greatly responsible for the success of both of these poets in the English language.

Reid’s poetry came back into circulation in Scotland in 1978, when Canongate published Weathering: Poems and Translations; and then Oases which in 1997 combined poems – including some translations – in a pocket-size hardback, bringing his work across these genres to the attention of a new generation.

The editor, Tom Pow, has done a magnificent job of assembling the crème de la crème of Reid’s verse. Pow is himself a well-known poet. Born in 1950 in Edinburgh, he is the author of twelve collections, including, most recently, At the Well of Love (2016) and A Wild Adventure (2014), the latter a biography, rendered in poetry, of convict forger and illustrator Thomas Watling. He was also a close friend of Alastair Reid.