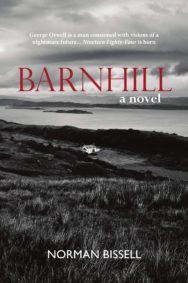 George Orwell left post-war London for Barnhill, a remote farmhouse on the Isle of Jura, to write what became Nineteen Eighty-Four. He was driven by a passionate desire to undermine the enemies of democracy and make plain the dangers of dictatorship, surveillance, doublethink and censorship.

Typing away in his damp bedroom overlooking the garden he created and the sea beyond, he invented Big Brother, Thought Police, Newspeak and Room 101 – and created a masterpiece.

Barnhill tells the dramatic story of this crucial period of Orwell’s life. Deeply researched, it reveals the private man behind the celebrated public figure – his turbulent love life, his devotion to his baby son and his declining health as he struggled to deliver his dystopian warning to the world.

Norman Bissell became principal teacher of history at Braidhurst High School in Motherwell after obtaining an MA (Honours) degree in philosophy and history from the University of Glasgow. He was formerly a member of the Scottish Examination Board history panel and until recently an Area Officer of the Educational Institute of Scotland. His first poetry collection Slate, Sea and Sky features poems written in his native Glasgow and on the Isle of Luing in Argyll, where he now lives. His interest in the need for radical cultural renewal prompted him to found and lead the Open World Poetics group from 1989 until 1999 and to become director of the Scottish Centre for Geopoetics in 2002.