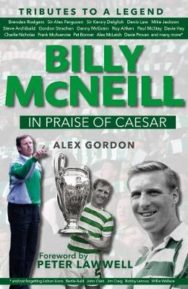 Billy McNeil: In Praise of Cesar

Billy McNeill is one of the most legendary Celts of all time, spending his entire playing career at the Glasgow giants and making 832 appearances between 1958 and 1975. He was voted the Greatest-Ever Captain by the fans and also had two stints as manager of the team, including guiding them to the League and Cup double during Celtic’s Centenary year in 1988.The photograph of McNeill holding aloft the European Cup in the brilliant Lisbon sunshine after the side’s 2-1 triumph over Inter Milan on May 25 1967 is the most iconic image in the club’s history.As the onfield leader, he won nine Scottish League championships, seven Scottish Cups, six League Cups while playing 29 times for his country. He was awarded the MBE in 1974.Now, Celtic chief executive Peter Lawwell pays his own special tribute to the Parkhead great along with a Who’s Who of the game’s royalty, talking about their unforgettable experiences and wonderful memories of playing with and against Billy McNeill.Billy McNeill’s breathtaking journey through the beautiful game is charted from his debut against Clyde on 23 August 1958 through the momentous years as player and manager, the highs, the lows, the triumphs, the tears. 60 years on from his debut appearance, this unique book celebrates the astonishing life and times of one of world football’s bestloved personalities.

Alex Gordon is an author and former sports editor of a national newspaper. His previous books include Celtic: The First 100 Years,The Lisbon Lions. and A Bhoy Called Bertie.